What’s next for history’s greatest Olympian? - The Horn News 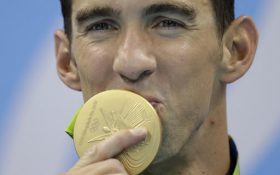 Michael Phelps has conquered just about everything he can in a swimming pool.

Now he wants to conquer being a dad.

The most decorated athlete in Olympic history insisted again Sunday that his swimming career is over, less than 24 hours after claiming his 23rd gold medal in the 4×100-meter medley relay.

He ditched the athletes village and spent the night with his fiancee, Nicole Johnson, and their 3-month-old son, Boomer.

“Being apart from him for the last three weeks, four weeks from when I saw him last, he’s grown so much,” Phelps said. “I changed a diaper last night. He was just sitting there looking at me, smiling the whole time. It brought a tear to my eye, just because he hasn’t seen me in a while and it was so cool to see him smiling back at me and laughing and giggling.”

Boomer was sleeping when Phelps got to the hotel after what was presumably the final race of his career.

“I picked him up after I was done and just held him,” Phelps said. “That’s something I’m really, really looking forward to, just watching him grow up.”

Phelps said he’s eager to play catch with his son in the backyard, take him to sporting events, do whatever he can to be a huge part of Boomer’s life.

Phelps’ parents divorced when he was a child, and the swimmer had a strained relationship with his father, Fred, for years. Only after a second drunken-driving arrest and six weeks of inpatient therapy did Phelps reconnect with his dad, who cheered on his son a month ago at the U.S. Olympic trials but wasn’t able to travel to Brazil.

Phelps and his soon-to-be wife intend to continue living in suburban Phoenix, at least for the next couple of years. But he stressed that Baltimore will always be home.

Phelps also talked about some familiar goals: working with his foundation to teach more children to swim and continuing his efforts to make the sport more popular – not just in the United States but around the world. He’s already seen the growth that was sparked by his phenomenal success over five Olympics.

In the only event he didn’t win in Rio, he was beaten by a 21-year-old from Singapore, Joseph Schooling, who grew up idolizing the American star. Several of Phelps’ younger teammates talked of getting his autograph or having posters of him on their wall when they were children. He hopes to carry on that momentum, even though he’s stepping away from competitive swimming.

Phelps is not giving up the pool, however. He plans to keep swimming as part of his exercise regimen, hoping to keep his weight around the current 190 pounds.

“I will never let myself get to 230 pounds again,” vowed Phelps, who put on weight after previous Olympics. “It’s great exercise. It’s something I know how to do. It will be easy to pop in and swim two miles a couple of times a week. I’ve always been so schedule-oriented. I’m going to try to get on that earlier than later this time.”

When his news conference ended, Phelps bounded out of his chair.

“You guys won’t see me at one of these things for a long time,” he told reporters. “See you later.”