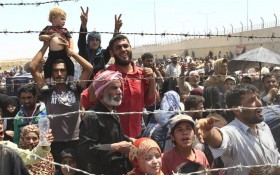 There’s increasing pressure on America and European allies to accept millions of potential migrants from Syria and the Middle East. But five of the wealthiest Middle Eastern countries – Saudi Arabia, United Arab Emirates (UAE), Qatar, Kuwait and Bahrain – refuse to let a single refugee into their own nations.

Rather than do their share, these countries have closed their borders while calling on others to do more.

These five wealthy nations — UAE, Qatar and Kuwait are three of the 10 richest countries on the planet in terms of per capita income —  appear worried about the cost, procedural and security risks associated with accepting refugees, but seem willing to let other nations shoulder the burden. Neither Saudi Arabia, UAE, Qatar, Kuwait nor Bahrain have signed a United Nations accord that would require them to accept refugees in certain situations.

Back in the U.S., the Associated Press is reporting that the Obama administration is “actively considering” ways to be more responsive to the global migrant crisis, including offering resettlement in the United States to refugees.

Peter Boogaard, a spokesman for the National Security Council, said the United States is in contact with countries in the Middle East and Europe grappling with the influx of more than 340,000 people from the Middle East, Africa and Asia. Many are fleeing the civil war in Syria and areas in Iraq under the control of Islamic State militants.

Boogaard noted that the U.S. has provided over $4 billion in humanitarian assistance since the Syrian crisis began, and over $1 billion in assistance this year.

The situation has also led to calls for the U.S. to take a greater role in the crisis by expanding its refugee program and making it easier for immigrants to navigate the cumbersome and time-consuming process. The U.S. has sometimes expedited resettlement, as it did in 1975, when it helped tens of thousands of refugees from South Vietnam and other nearby areas settle in the United States after the fall of Saigon.

In Europe, hundreds of angry and frustrated asylum-seekers broke through police lines Monday near Hungary’s southern border with Serbia and began marching north toward Budapest, while Britain and France pledged to take in tens of thousands more refugees to try to ease the crisis.

As European leaders debated how to share responsibility for those who are already seeking refuge, Germany promised to spend billions of euros in extra aid for those already there and those yet to arrive and has pledged to take up to half-a-million refugees each year.

But in many of the wealthiest Middle East countries, Muslim leaders have totally turned their back on the crisis.