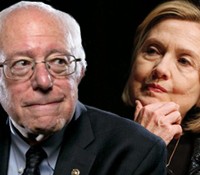 A break in… allegations of spying… the Bernie Sanders campaign suddenly has a Watergate-style scandal on its hands.

According to The Washington Post, one of Sanders’ staffers exploited a technical glitch to break into a server that had private voter information belonging to former Secretary of State Hillary Clinton’s presidential campaign.

And the backlash has already been severe.

The Sanders’ campaign has claimed it fired the staffer who accessed the information, but the investigation into who was really behind the data breach is just getting warmed up.

In response, the Democratic National Committee (DNC) isn’t pulling its punches. Effective Thursday, the DNC announced that Sanders’ campaign is suspended from accessing any DNC voter data again until it provides a proper explanation, a punishment many analysts consider a major blow to Sanders’ presidential campaign.

The DNC keeps a massive amount of voter information in a master data file, and rents the information within to Democratic campaigns on both national and local levels. The data rented from this DNC master file is then added to by each campaign in their own file with information gathered by volunteers.

Gaining access to another campaign’s data could be a huge advantage, as it could help a campaign target their rivals’ supporters.

To prevent this, information firewalls are set-up by a third-party vendor that handles the master data file. The goal is to prevent rivals from stealing data gathered by their opponents’ campaigns, or tampering with opponents’ information.

The third-party company handling the information, NGP VAN, indicated that Wednesday that while they were patching their firewall software, a staffer from the Sanders campaign may have used a temporary security window to access proprietary information from the Clinton campaign.

Sanders’ campaign being cut off from the national party’s voter data is crippling, because it prevents his campaign from registering new supporters or contacting many current volunteers.