Hypocrite! Watch Sen. Schumer say, “We should not confirm ANY Bush nominee” - The Horn News 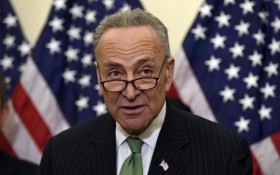 Democratic Sen. Charles Schumer of New York is complaining that Republicans are being “obstructionists” when they say they plan to fight President Barack Obama’s Supreme Court nominees.

But watch Schumer say in 2007 that he wants his fellow Democrats to block ANY nomination by then President George W. Bush… a full 19 months before Bush left office.