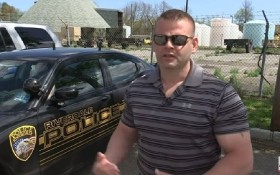 A New Jersey police officer wrestled a distraught man to the ground who said he wanted to die, stopping him from jumping off an interstate bridge.

Riverdale Police Sgt. Greg Bogert said Wednesday he was called Monday to respond to a man in distress on Interstate 287 and found the man near a bridge on the highway. The bridge also is near the Pequannock River.

Dashcam video from Bogert’s cruiser shows him approaching the unidentified man, who then runs toward the edge of the bridge. Bogert, who is heard yelling, “Don’t do it,” chased him and tackled him to the ground.

“He said his family died and, ‘I just want to die,'” Bogert said. “I was just trying to get his mind off that ledge.”

Bogert said he asked the man what happened to his family but the man broke down in tears.

Bogert was on the other side of town when the initial call came in about a man walking on the overpass. By the time he was nearly there, Bogert said, he knew it was likely a suicide attempt.

The man was taken to a nearby hospital for treatment. Bogert said the man’s car is still in police custody.

It’s the first time Bogert has played a part in stopping an attempted suicide.

Riverdale is a small borough of about 3,500 people in northern New Jersey’s Morris County.