Voters choosing strategically, not who they actually support - The Horn News 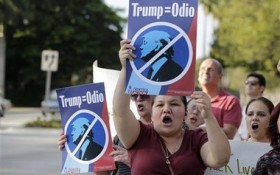 Kennedy Copeland is a Marco Rubio fan who voted for John Kasich in Ohio. Ann Croft is all in for Hillary Clinton but cast her ballot for Rubio in Virginia. Julia Price will back the Democratic nominee in November but voted for Kasich in Tennessee.

Are these voters confused? No, they’re voting strategically in the year of Donald Trump in hopes of altering the outcome of the presidential race by casting ballots for someone other than their favorite candidate.

Democrat Croft, for example, figured Clinton didn’t need her help to win Virginia. So she decided to vote instead against Trump in the Republican primary because some of her GOP friends were worried he would win the state.

“I was feeling almost sort of dirty about doing it,” she recalled. But then Croft talked to a friend who had done exactly the same thing, which made her feel better.

In other cases, Democrats are crossing over to do just the opposite: voting for Trump, on the thinking he’d be the weakest candidate to face the eventual Democratic nominee.

The notion of strategic voting — in a way, playing amateur political scientist — is now front and center in Ohio and Florida, which award winner-take-all delegates in the Republican races as part of Tuesday’s five-state round of voting.

Rubio’s campaign raised eyebrows recently by urging Ohioans to cast ballots for Kasich as the best strategy to stop the Trump juggernaut.

Copeland, president of the College Republicans at Xavier University, says she did just that, casting an early vote for Ohio Gov. Kasich “because he has the best chance of winning Ohio against Trump” even though Rubio is her first choice.

Some voters are taking it upon themselves to get strategic without any coaching from a campaign.

In Minnesota, Eric Goodemote said he’d never voted for a Republican for anything before casting his caucus vote for Rubio to block Trump.

He said he found “the prospect of Donald Trump’s mere candidacy so horrifying that I decided to do the other party a favor and cross lines to vote for a guy who I would normally never even have considered.”

Columbia University’s Robert Shapiro says that while it’s not uncommon for a voter to select one candidate over their first choice in the same party based on electability, this year there’s more discussion about crossing party lines to influence what’s happening on the other side.

“We’re talking about something a lot more complicated and a lot more interesting,” says Shapiro, who defines strategic voting as “basically an insincere vote to pursue another purpose.”

More than insincere, it may be illegal in some states — although no one seems too concerned about that.

Law professor Dan Tokaji, an Ohio State University election law expert, says some states require voters to sign a statement saying that they desire to be affiliated with a particular party and support the party’s principles before casting ballots in that primary.

Democrats who choose to vote in such a primary but don’t support the party’s policies “are committing election falsification by stating that they do in fact support those principles,” says Tokaji. “Will they be prosecuted? Almost certainly not.”

In Ohio, in nearly all cases, voters who ask for a Republican or Democratic ballot will be given one. But, Josh Eck, a spokesman for Ohio’s secretary of state, says that if, for example, a poll worker has direct knowledge that the voter requesting a Republican ballot is actually a Democrat, the worker might make the voter sign an affidavit declaring party affiliation.

Vanderbilt University’s John Geer said that when voters cross over to nominate a weaker candidate in the opposing party it’s known as “raiding.” There’s always some of that, he says, and there may be more than usual this year with Trump in the mix. But, Geer added, “The vast majority of the Democrats that Trump is getting are voting for him because they like him, not because they want to weaken the Republican Party.”

Plenty of voters are upfront about their electoral schemes, and in many states there’s no legal prohibition to voting in either primary.

Sam Brunson, a liberal law professor in Chicago, says he figures Clinton doesn’t need his vote in Tuesday’s open Illinois primaries, so he’ll hold his nose and vote for a Republican — probably Ted Cruz — to try to deny Trump the nomination. He’s worried about the damage to the country that could be caused by a Trump nomination, saying that could send the wrong message to those who are racist and xenophobic.

Others are still waging battles between their heads and hearts in trying to select a candidate.

Republican Nancy Froelich, in Palm Beach, Florida, started out a conversation Monday by saying she was leaning toward voting for Cruz as the best candidate in Tuesday’s Florida lineup. She said she likes Kasich, but thinks voting for him could end up helping Trump. But then again, she said, “it might make more sense to vote for Rubio” to keep Trump from winning in Rubio’s home state.

“Call me back in an hour and ask me again,” she said.