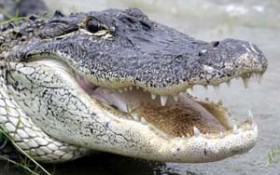 A giant alligator is getting worldwide attention after golfers took a video of it strolling across a Florida course.

The Bradenton Herald reports the estimated 15-foot alligator has roamed the Buffalo Creek Golf Course in Palmetto for years. But this week people from around the world have been asking about it after a video was viewed by millions on YouTube and other social media websites.

Course manager Ken Powell said he’s received phone calls from news stations in Scotland, Japan and Australia asking about the gator, which makes occasional appearances at the course. Golfers from around the country have also called looking to play the course after seeing the gator.

Powell said the gator hasn’t harmed any humans and there aren’t plans to have it removed from the course.