[URGENT] Iran could have nukes within the year - The Horn News 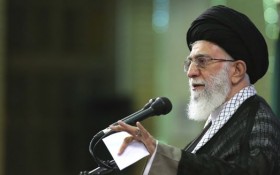 President Barack Obama nearly has the votes to sustain a veto of any Republican efforts to scuttle his nuclear accord with Iran. But critics say the weak inspections language in the deal could leave Iran with a nuclear arsenal in a matter of months.

With their nuclear program at full capacity, Iran could be less than a year away from getting the country’s first nuclear weapon — maybe even six months under a worst-case scenario — according to the timetable put out yesterday by the non-profit group IranWatch. Iran already has enough low-enriched uranium for a total of seven warheads.

According to the Associated Press, Obama is now just one Senate vote shy of being able to declare success on the Iran nuclear appeasement deal, which doesn’t allow inspection of certain facilities.

Senate support for the deal now stands at 33 votes. Once it reaches 34 votes, Senate Democrats would be able to uphold Obama’s expected veto of GOP legislation aimed at blocking the Iran deal. That disapproval resolution is set for a vote later this month.

Republicans in Congress and running for president unanimously oppose the deal, which aims to curb Iran’s nuclear program in exchange for relief from economic sanctions. The Israeli government is vehemently against it, contending that concessions made to Iran could empower that country, which has sworn to destroy Israel. But critics have failed to use Congress’ summer recess to turn the tide against the agreement, despite a multimillion-dollar lobbying campaign funded by the powerful American Israel Public Affairs Committee, or AIPAC.