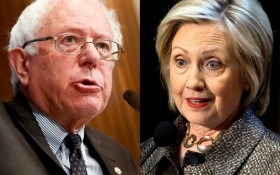 Should Democratic polling trends continue, former Secretary of State Hillary Clinton’s campaign could be heading towards major defeat in Iowa. According to the Des Moines Register/Bloomberg Politics Iowa Poll released on Saturday, Clinton is now barely leading in the state.

She retains the support of only 37 percent of likely Democratic caucus-goers in Iowa, the first state to hold a primary vote. Vermont Senator (and self-described socialist) Bernie Sanders is rapidly gaining, now at 30 percent.

That’s terrible news for Clinton – the most recent Iowa Poll, in May, had her ahead of Sanders by 40 percent. That means Clinton continues to lose a huge chunk of her base, many of whom are flocking to the Sanders campaign.

According to the Associated Press, Clinton took time at the recent Democratic National Committee summer meeting to insist she is the party’s standard-bearer in next year’s election.

Pointing to big losses in the 2010 mid-term elections, Clinton says the party can’t allow that to happen again and must rebuild “from the ground up.”

Meanwhile, Sanders warned party leaders at the DNC meeting that the party will not retain the White House and recapture the House or Senate “unless we generate excitement and momentum and produce a huge voter turnout.”

He tells DNC members that type of turnout “will not happen with politics as usual. The same old, same old will not be successful.”

That was apparently a reference to Clinton, the presumptive front-runner in the party’s presidential nominating contest. Clinton has been dogged by questions about her emails and a private server she used as secretary of state.

If these polling trends continue, Sanders could very easily claim an important victory in Iowa. Such a high profile, early loss could totally destroy the Clinton presidential campaign.