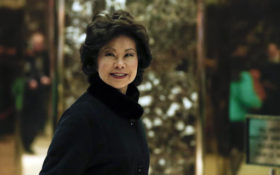 The Trump administration is looking to “unleash the potential” of private investors to boost the national transportation networks that underpin the U.S. economy, transportation secretary-designate Elaine Chao plans to tell lawmakers Tuesday.

Economic gains are being jeopardized by infrastructure “in need of repair, the specter of rising highway fatalities, growing congestion, and by a failure to keep pace with emerging technologies,” according to prepared testimony Chao is scheduled to deliver at a hearing of the Senate Commerce, Science and Transportation Committee.

Chao emphasized a significant difference between traditional program funding and “innovative financing tools” that can “take full advantage of the estimated trillions in capital that equity firms, pension funds, and endowments can invest.” She added that private investment should be “incentivized with a bold, new vision.”

While her testimony doesn’t detail those incentives, a white paper released by President-elect Donald Trump’s campaign shortly after the election proposes the government provide $137 billion in tax credits to infrastructure investors. The paper’s authors — billionaire investor Wilbur Ross, whom Trump has picked to be commerce secretary, and economics professor Peter Navarro, Trump’s choice to head the National Trade Council — estimate the tax credits will generate an estimated $1 trillion in private sector investment over 10 years.

But transportation experts point out that private investors are largely interested only in projects that produce a revenue stream with which to pay them back, like toll roads. There are relatively few large projects like that in the country. What state transportation departments most need, they say, is help with a growing backlog of maintenance and repair projects for aging highways, bridges and transit systems. Providing tax incentives also runs the risk of providing a windfall to investors for projects that would have been built anyway.

Trump repeatedly promised during the presidential campaign to generate $1 trillion in spending on the nation’s roads, bridges, railways and airports, as well as other types of infrastructure. It’s also one of the principal ways he said he would create jobs. But since the election, Trump and his transition team have been relatively quiet on the subject.

House and Senate GOP leaders have said they’ll wait to see what the new administration proposes before tackling an infrastructure bill. Trump has said he expects to be occupied early in his administration with cutting taxes and repealing one of President Barack Obama’s signature accomplishments, the Affordable Health Care Act. Infrastructure isn’t expected to be dealt with until late spring.

Chao, 63, was labor secretary during George W. Bush’s administration, and deputy transportation secretary under President George H.W. Bush, making her more of a known quantity than some nominees. She is also the wife of Senate Majority Leader Mitch McConnell, and many senators have a personal relationship with her.

But she hasn’t been immune from criticism. Labor unions say that as labor secretary she mostly sided with industry when enforcing labor and safety rules.

As transportation secretary, Chao would be responsible for regulating auto, truck, train, transit, pipeline and aviation safety. The department frequently faces pressure from industry to relax safety rules and block new ones.

Chao, who has been a fellow at conservative GOP think tanks the Heritage Foundation and the Hudson Institute, is likely to lend a more sympathetic ear to industry pleas for less regulation.