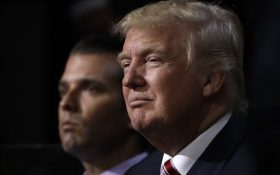 To hear the media tell it, the presidential election is already over. Republican presidential candidate Donald Trump’s campaign has been one long train wreck that has turned off every single voting group in America, they say.

But you know who’s not buying that stack of lies? Democrat voters.

What no one in the media will tell you is that Trump already has the support of enough Democrats to compete in states that haven’t voted for a Republican in decades. Hundreds of thousands of Democrats have switched parties to support Trump, and millions more will likely vote for him in 2016.

Blue collar Democrats, especially union members, are backing Trump because of his promise to negotiate trade deals that put our workers first, crack down on China, save jobs from illegal immigrants, and end the war on coal.

It’s made him popular in places like Weirton, West Virginia, where the Weirton Steel Company once employed 12,000 people from three states. Now, it’s down to 900 workers, with thousands unemployed voting in Ohio and Pennsylvania.

Clinton is a charisma-free criminal who supports the TPP and other policies that would wipe their factory right off the map. Democrats know it. That’s why two polls taken in January found that 20 to 25 percent of Democrats would support Trump.

Yes. And it could mean there’s an electoral earthquake waiting to happen.

Congress Did What? [SHOCKING]

Trump is the one candidate with the credentials and charisma to win over Democrats in swing states, even Democratic states, like these. One analyst has estimated as many as 1.2 million Democrats voted for The Donald in the primaries alone.

Experts say that Trump could win the union vote this year. In 1996, 30 percent of union households voted for the GOP, then 40 percent voted for Mitt Romney in 2012.

Right now, Mr. Trump and Clinton are tied at 44 percent support among union households, according to a recent Wall Street Journal/NBC News poll.

That’s too close for comfort for the professional unions that are part of the Democratic machine and endorsed Hillary.

“If you are talking [about] union people, he is speaking our language,” said Josh Goldstein, deputy national media director for the AFL-CIO. “It is our job to go out and educate people now, so [the Trump campaign] doesn’t cross that threshold and become a threat.”

A threat. That’s how union bosses see the candidate most in line with their rank-and-file members – a threat to the cozy relationship they have with Democratic Party officials. They get big salaries and political favors, and the Democrats get the votes. But then China gets our factories, and the union workers get the shaft.

Clinton sure isn’t speaking their language. She’s admitted, “We’re going to put a lot of coal miners and coal companies out of business.” And she’s all in favor of importing immigrants who literally don’t speak their language.

Her anti-coal, anti-industrial policies has fired so much red-hot backlash that Vice President Joe Biden on Thursday let a little truth slip out. He told a crowd in Warren, Ohio, ” I know some of you are mad at Hillary.”

That’s why some of the biggest name Democrats won’t vote for her. Former U.S. Senator Jim Webb, who ran for president against her as a Democrat this year, said he won’t vote for Clinton. His campaign strategist and his son have already endorsed Trump.

Union members are “the one solid group that will stick by” Trump “until November because his economic and populist message resonated,” said Robert Rupp, professor of history and political science at West Virginia Wesleyan College. “And it’s not just in West Virginia. It’s throughout the industrial states,” including places like Paul Ryan’s Wisconsin.

Right now, the only unions with the guts to endorse Trump are the ones on the front lines: the National Border Patrol Council and the New England Police Benevolent Association. (So far, the United Mine Workers has not endorsed a candidate.)

But like it or not, the big union’s members are lining up behind The Donald.

A new Trumpcrats PAC is bringing Democrats on board the Trump Train.

And it’s working. A new Rasmussen poll finds that Trump supporters are less likely to admit they support Trump to pollsters, meaning he has hidden strength the polls don’t show.

Trump has a real chance to outperform McCain and Romney.

“The workers of this country are going to vote for me,” he said. “I believe their members will be voting for me in much larger numbers than for” Clinton.

Jeff Hester of Tennessee, founder of “Teamsters for Trump”, thinks there’s something more going on. “There is a new party forming, the Party of Trump,” Hester told CNN.

And it’s marching to victory in November.