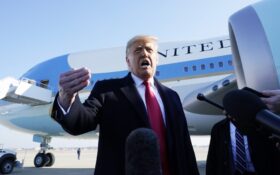 Former President Donald Trump departed from Washington, D.C. on Wednesday morning to begin his post-presidency life at his Mar-Lar-Go estate in Florida.

But after he arrived in the Sunshine State, Trump used his executive powers one last time — and it was in the middle of President Joe Biden’s inauguration.

With just 45-minutes left before Biden was officially sworn in, the White House announced Al Pirro had been pardoned.

“Al Pirro, a businessman and lawyer known for his sharp clothes and well-coiffed silver mane of hair, was convicted at a trial in New York federal court in 2000 of conspiracy and tax evasion in connection with illegally deducting $1.2 million of personal expenses as write-offs for his business,” CNBC reported.

During his presidency, Trump granted clemency to fewer convicted felons than almost all of his predecessors.

Trump pardoned former chief strategist Steve Bannon in the final hours of his White House term as well, part of a flurry of pardons for more than 140 people, including rap performers and ex-members of Congress.

Trump did not pardon himself, despite speculation that he would in the face of potential federal investigations. He had previously asserted that he had the authority to do so.

He also did not pardon his children or his personal lawyer, Rudy Giuliani.

The final list was full of more conventional candidates whose cases had been championed by criminal justice activists. One man who has spent nearly 24 years in prison on drug and weapons charges but had shown exemplary behavior behind bars had his sentence commuted. So did a former Marine sentenced in 2000 in connection with a cocaine conviction.

Bannon was charged in August with duping thousands of donors who believed their money would be used to fulfill Trump’s chief campaign promise to build a wall along the southern border. Instead, he allegedly diverted over a million dollars, paying a salary to one campaign official and personal expenses for himself. His co-defendants were not pardoned.

Most other presidents have issued controversial pardons before leaving the White House. But Wednesday’s list also included its share of high-profile defendants not associated with the Trump administration.

Among them were rappers Lil Wayne and Kodak Black, both convicted in Florida on weapons charges. Wayne, whose real name is Dwayne Michael Carter, had recently met with the president on criminal justice issues. Kodak Black, also known as Bill K. Kapri, had his sentence commuted.

Pardoned were former Rep. Rick Renzi, an Arizona Republican who was sentenced to three years for corruption, money laundering, and other charges, and former Rep. Randy “Duke” Cunningham of California, who was convicted of accepting bribes from defense contractors. Cunningham, who was released from prison in 2013, received a conditional pardon.

Additionally, Trump kept up the presidential tradition of leaving his successor a note in the Oval Office — a tradition started by former President Ronald Reagen.

There is no word on what Trump wrote in his note to Biden.