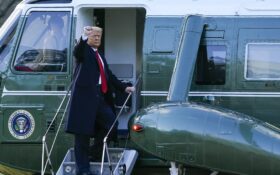 President Donald Trump pumped his fist and waved as he departed the White House on Marine One Wednesday for the last time as president before giving a final farewell speech at Joint Base Andrews.

Was a hidden message included in Trump’s final address to supporters?

“As I prepare to hand power over to a new administration at noon on Wednesday, I want you to know that the movement we started is only just beginning,” Trump said in an address released late Tuesday.

“It’s been a great honor, the honor of a lifetime. The greatest people in the world, the greatest home in the world,” Trump told reporters Wednesday before boarding Marine One on South Lawn. “We love the American people, and again, it has been something very special. And I just want to say goodbye.”

“But, hopefully, it’s not a long term goodbye.,” he said. “We’ll see each other again.”

Trump repeated the theme of returning in his address at Joint Base Andrews, where he was greeted by hundreds of supporters.

“We will back in some form,” Trump teased twice during his 9-minute speech.

The hints come after The Wall Street Journal reported that formal talks had begun between Trump and his aides on the creation of a new political party, named the “Patriot Party.”

In his final hours, Trump issued pardons for more than 140 people, including his former strategist, rap performers, ex-members of Congress, and other allies of him and his family.

But although Trump has left the White House, he retains his grip on the Republican base, with the support of millions of loyal voters, along with allies still at the top of the Republican National Committee and many state party organizations.

For now, Trump will retire to Florida with a small group of former White House aides — where they’ll no doubt chart his next political move.

Do you want Trump to start a new “Patriot Party” for his supporters?