Trump to GOP: I’ll run against you - The Horn News 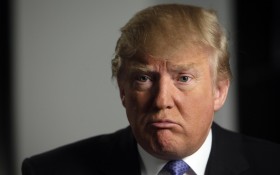 Republican Donald Trump on Sunday refused to rule out an independent bid for president in 2016, a move that could divide Republican voters and offer an easy victory to Democratic presidential front-runner Hillary Clinton.

Asked on ABC’s “This Week” whether he would consider a third-party run if GOP opponents try “to take you out,” Trump said, “I will see what happens. I have to be treated fairly. If I’m treated fairly, I’m fine.”

Pressed by George Stephanoloulos to give a yes or no answer on a third-party run, Trump refused. The billionaire and former reality show star has threatened in the past to launch an independent bid if the Republican party didn’t give him a fair shake at the nomination.

Trump is leading the race for the GOP nomination for the fourth straight month, with Republican establishment candidates such as Jeb Bush and Marco Rubio far behind. All the GOP candidates, Trump included, have signed a pledge to support the party’s eventual presidential nominee and forgo independent runs in 2016.

He suggested that his lead in the polls, unshaken by disparaging remarks he’s made about ethnic groups or his lack of specifics on foreign policy, has vexed the Republican party.

“They can’t understand, you know, how come an outsider can be doing so well within the party,” Trump said.

His standing in national polls has only solidified since recent Islamic militant attacks in Europe, particularly the Nov. 13 strikes on Paris that killed 130 people and wounded hundreds of others. The Islamic State group has claimed responsibility for those attacks.

Trump has pledged to be the toughest of all candidates toward people posing threats to the U.S. On Sunday he said he would bring back waterboarding on terrorism suspects.

Trump this weekend has tried to back away from his support for a government database to track Muslims in the United States, an idea that drew sharp rebukes from his GOP rivals and disbelief from legal experts. On Thursday, an NBC News reporter pressed Trump in Iowa on whether there should be a database for tracking Muslims in the U.S. Trump replied: “There should be a lot of systems, beyond databases.”

Would he put such a database in place as president?

“I would certainly implement that. Absolutely.”

He tried in another interview to clarify that position, suggesting a “watch list” for the Syrian refugees admitted to the U.S.

On ABC Sunday, Trump was asked if he rules out a database on all Muslims in the U.S.