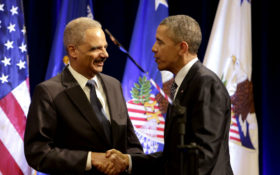 It seems that while no one was looking, the Democratic Party passed a new rule for 2020: Everyone running for president has to support violence – and the more violent they sound, the better.

He told a crowd of Democratic youth that they needed to “fight” Republicans – even implying violence – and his words got a stiff reaction from President Donald Trump.

“Michelle (Obama) always says – I love her; she and my wife are like, really tight, which always scares me and Barack – but Michelle always says, ‘When they go low, we go high’” Holder said.

The thought had the whole crowd of mostly young activists whooping and cheering in excitement, in anger, even in… anticipation.

The thought of the man who had been in charge of enforcing the nation’s laws using words that could stir up physical violence caught the president’s eye – and drew a sharp rebuke.

“He better be careful what he’s wishing for,” the president told Fox News.

Winking at physical intimidation is sickening – but it’s also the new litmus test for Democratic Party candidates. Want to clutch the 2020 nomination? Get on board!

The potential Democratic presidential hopefuls siding with the mob just keeps adding up.

In March, former Vice President Joe Biden said, if he could’ve had a fist fight with Donald Trump when he was younger, Biden would “beat the hell out of him.”

Earlier this week, former Secretary of State Hillary Clinton said that “civility” can only return when Democrats win office.

President Trump slapped down these dangerous words on Thursday.

“They have to be careful with the rhetoric, because it is very dangerous what Holder says,” Trump warned.

Last week, The Horn News talked about some of the other incitements to violence – but it seems like it’s getting harder and harder to keep up.

Everyone from rappers, to Broadway playwrights, to Hollywood washouts such as Kathy Griffin and Madonna, have talked about or depicted the assassination of Trump.

No wonder First Lady Melania Trump told ABC News this week, “I’m the most bullied person in the world.”

That’s bad enough – but it’s worse than that. All Republicans, of all stripes, have started to feel the heat from the bloodthirsty Left.

Senator Rand Paul has been beaten up. Multiple members of the Trump administration have been threatened or shouted down in public.

Even Senator Susan Collins, a liberal Republican at odds with Trump supporters, has seen her family or staff threatened with murder or rape.

It’s revolting enough for performers or journalists to keep daydreaming of assaulting or assassinating their political rivals.

But when the people charged with enforcing the law laugh about breaking the most basic law of civilization – Thou Shalt Not Kill – we’ve entered perilous times.

Watch Holder’s disturbing comments below, and say a prayer for the safety of our president, his family, and all Republicans in office —