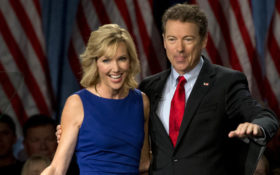 The hearing for Supreme Court nominee Brett Kavanaugh has cranked up the level of crazy in U.S. politics to a new high – and some Democrats have gone beyond words, spilling into full-blown violence.

Now, Senator Rand Paul’s wife, Kelley, is saying the violence has got to stop. In an op-ed for CNN this week , Kelley said that the radical left’s threats and intimidation have spiraled out of control.

Kelley needed only nine words to prove to liberals how their deranged violence has negatively impacted her life — and many other Republicans.

“I now keep a loaded gun by my bed,” Kelley wrote. “I have never felt this way in my life,” she added.

“Earlier this week, Rand was besieged in the airport by activists…preventing [him] from moving forward, thrusting your middle finger in [his] face, screaming vitriol,” she wrote.

Last year a Democratic neighbor beat him up at his own home, breaking six ribs and leaving the senator with a collapsed lung – and the state’s Democrats thought it was hilarious.

Kentucky Democrat Alison Lundergan Grimes cracked her idea of a great joke about Paul after the violent attack.

“Many folks say that Rand Paul can’t be beat,” she said. “I don’t buy that. Just ask his neighbor. He can be beaten.”

For Kelley, her husband’s senseless beating is no laughing matter. She put the blame right where it belongs: on Democratic leaders stoking fear and winking at violence.

Democratic Sen. Cory Booker – a likely 2020 presidential candidate – told an audience in July, “You should get in the face of your Congresspeople.”

Words like that are going to get someone hurt or killed, Kelley wrote.

“Retract your statement,” Kelley told Booker. “I would call on you to condemn violence, the leaking of elected officials’ personal addresses… and the intimidation and threats that are being hurled at them and their families.”

Kelley’s statement is correct — and the Kavanaugh drama has ignited more violence from the left.

Last Sunday, police arrested a 42-year-old artist for spray-painting the words “RAPE” and “SHAME” all over Republican Party Headquarters in Winnebago County, Illinois.

The suspect, Timothy Damm, might not have gotten caught red-handed – but he reportedly couldn’t wait to get back to the scene of the crime, where he was interviewed about it on TV.

“I think it’s great,” Damm told a local reporter, who said she was surprised to see him already at a newly reported crime scene.

“I haven’t been great with the Republicans right in my neighborhood, but somebody labeled them for what they are,” Damm told her. “I’m happy about that.”

He praised his own suspected artwork and even explained part of the symbolism.

“It’s hard to not focus on the beauty” of the vandalism, he said in a four-minute interview where he repeatedly broke out into maniacal laughter.

“Republican equals rape,” he told the reporter. “They encourage rape. And if you rape someone, they will defend you.”

Cops say after they took Damm into custody, he danced on a table, then stripped down to his underwear.

If you’re looking for proof that Trump Derangement Syndrome is a mental disorder, there’s Exhibit A.

But it’s also a sign of the violence and hatred the left is churning up.

One Illinois state senator called this crazy act exactly what it is: “A hate crime.”

County GOP leaders pointed out that 7 women work in the building, and two dozen more meet there regularly. “They should not have to be afraid because some people could not control their hate,” they wrote.

President Donald Trump’s victory and the empty, phony, baseless charges against Brett Kavanaugh have driven the Democrats into a frenzy.

The liberal elite have run the show for most of 70 years. But, now the average American is determined to take back their country. The liberal elites can only watch, cry – and demand thugs to take action.

First, the Democrats lost Congress. Then, they lost the presidency. Now, they’re about to lose the Supreme Court.

Their hold on the government – and the whole country – has slipped away.

If they can’t control the politicians in D.C., they want to beat them up – or worse.

One can only imagine what will happen if they lose the 2018 midterms?