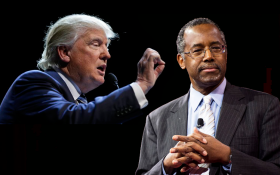 Presidential candidate Donald Trump’s rise in the polls had been dismissed by many political analysts who have repeatedly said he wouldn’t last.

According to the latest Reuters/Ipsos poll, these analysts appear dead wrong.

The poll shows Trump surging ahead of the competition, with 42 percent of likely primary voters saying they support him. That represents a 17-point climb from earlier this month.

And it’s come mainly at the expense of other GOP candidates, who have struggled to gain traction.

Over the weekend, Trump made headlines for a speech in which the real estate mogul used a four-letter word not common to presidential campaign speeches, viciously attacked a rival and called voters “stupid.”

But Trump’s sometimes outlandish behavior doesn’t seem to be costing him support.

Dick Graves, a Trump supporter who attended the rally, said that while the candidate’s comments were perhaps “a little rash,” he wasn’t offended.

“It’s Donald. And he’s an entertaining speaker. I didn’t take it too seriously,” he said.

In the theater at Iowa Central Community College Thursday night, the mood changed as Trump continued past his usual one-hour mark and turned his focus to lambasting Carson, the soft-spoken retired neurosurgeon.

In recent weeks, Trump has been spending less time lobbing insults and more time talking about how his business experience and negotiating skills qualify him for the presidency. He was visibly mellower during this week’s fourth GOP debate and told reporters he’d been trying to be nicer.

But the performance Trump delivered was far from that.

In a dramatic monologue that at times involved voices and acted-out scenes, Trump expressed concern about Carson’s childhood temperament and questioned his religious conversion. He also railed against the people of Iowa as naive and gullible for believing Carson’s stories.

On foreign policy, Trump laid out his anti-Islamic State policy by saying he would “bomb the s— out of” their oilfields.

Carson said Trump’s broadside was “expected” in politics, but he decried “the politics of personal destruction.”

“I’m hopeful at some point that we reach a level of maturity that we can actually deal with the issues that are facing us right now and stop getting into the mud and doing things that really don’t matter,” Carson told reporters in South Carolina.