Trump on Iran: Deal made by “stupid people” - The Horn News 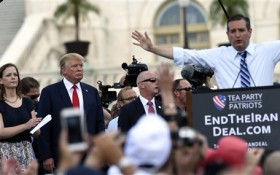 Their message to Obama – NO WAY on the Iran Deal!

Speakers at the rally savaged the proposed nuclear agreement with Iran, calling it an incompetently negotiated deal that will cost “countless” American and Israeli lives and should be discarded by the next president. Critics say that the accord, which has lax inspection guidelines, could actually help Iran get a nuclear weapon more quickly.

“We are led by very, very stupid people,” Trump, the GOP front-runner weighed in, at a midday rally on Capitol Hill. He called the deal “incompetent” and poised to fail in the fight against Islamic militants. “We will have so much winning if I get elected, that you may get bored with winning.”

Cruz, who invited Trump to the event, said supporters of the deal will have blood on their hands.

“You cannot wash your hands of that,” he said, naming House Speaker John Boehner and Senate Majority Leader Mitch McConnell, both Republicans, as two men who could stand in the way of the deal. “Any commander-in-chief worthy of defending this nation should be prepared to stand up on Jan. 20, 2017 and rip to shreds this catastrophic deal.”

The pairing at Wednesday’s rally is the product of what Trump acknowledged beforehand as “a little bit of a romance” at this early stage of the 2016 presidential race. In fact, Trump and Cruz are competing for many of the same anti-establishment, core Republican activists.

The two spoke as Congress debated the deal, which is designed to keep Iran from acquiring a nuclear weapon. Republicans and Israel say Iran can’t be trusted because its leaders want to annihilate the Jewish state.