Trump Jr. reaches out to assaulted teen - The Horn News 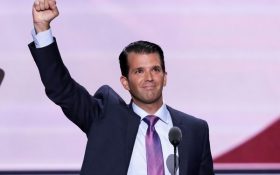 Donald Trump Jr. has come out in support of the teen who was assaulted for wearing a Make America Great Again hat, and offered the teen a new hat… signed by President Donald Trump himself!

As reported by The Horn News, an angry liberal attacked a teen simply because he was wearing a MAGA hat on Thursday. The attacker stole the young man’s hat, and threw his drink on the groups of youths.

Luckily, the 16-year-old, who has been identified as Hunter Richard by WOAI-TV, responded with class to the nasty comments hurled from the leftist.

Don Jr. tweeted his support of the teens, promising that he would replace his stolen hat if he could get the teen’s information. This is the sort of kindness that must be used to fight the intolerance and violence liberals throw at conservatives.

If someone can get me this young man’s information I’ll get him a new #maga hat… SIGNED by #potus!!! https://t.co/zHBz4gKpkf

The alleged attacker, Kino Jimenez, has been fired from his job as a result of the incident, and has subsequently been arrested and charged with felony theft.

Jimenez could serve up to 6 months in jail and be fined up to $200,000 if he is convicted of felony theft.