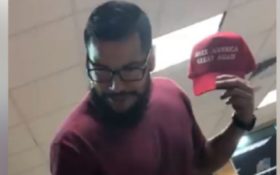 It is no secret that the left has become very unhinged, but a new video going viral on social media proves that their harassment against conservatives has reached a new level.

An emotionally deranged liberal has heeded Rep. Maxine Waters’ call for violence by attacking a group of teenagers at a restaurant in Texas.

On Tuesday night, a group of kids sat inside a Whattaburger restaurant when one of the kids wearing a “Make America Great Again” hat was attacked by a stranger.

Patricia Thompson Spittler shared a video on Facebook Tuesday night of her son and his friends eating when an angry liberal approached them and stole the MAGA hat off the teenager’s head.

As if stealing the kid’s hat was not enough, the scum bag then proceeded to throw his drink on the teenager.

The video has since gone viral on social media, even sparking some Twitter users to boycott Whattaburger until the incident was resolved —

This is how your customers are being treated in your establishment

We will be running a #BoycottWhataBurger campaign until this situation is rectifiedpic.twitter.com/bo48EuKovT

The man proceeded to walk out of the restaurant, but before he left, he told the teenager he planned to burn the hat in his fireplace.

The 16-year-old has been identified as Hunter Richard, according to WOAI-TV.

The bully has been identified as Kino Jimenez, who was reportedly worked at a local bar called “Rumble.”

The bar released a statement on Facebook on Wednesday, “It came to our attention earlier this evening that a part-time employee was captured on cell phone video assaulting another person at a local eatery,” the statement reads.

“We have since terminated this employee, as his actions go against everything that this establishment stands for.”

This should serve as a reminder to all the angry liberals out there — violence will not bring about change in our government — but it may bring a change to your employment status.