Trump: “I am your voice” - The Horn News 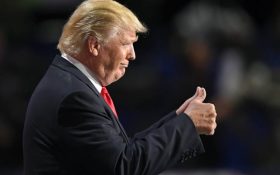 Donald Trump accepted the Republican nomination for president on Thursday, delivering a stirring 72-minute speech that brought listeners at the Republican National Convention to their feet — and wowed voters at home.

Trump’s speech painted a dire state of affairs in the United States and the world — instability abroad and crumbling infrastructure at home — and blamed those problems on President Barack Obama and his former secretary of state, presumptive Democratic nominee Hillary Clinton.

“This is the legacy of Hillary Clinton,” he said in Thurday’s primetime address. “Death, destruction, terrorism and weakness.”

Trump then promised anxious Americans that they will be safer and richer if he is elected in November, and the message appears to be resonating — especially when Trump focused on government corruption, according to a focus group live-polled of Fox News’ “Hannity”.

One panelist told host Frank Luntz that he entered the RNC as “Never Trump”, but was converted by Trump’s speech. “I’m 39 years old. That was the best speech by a presidential candidate I’ve heard in my entire life. And I don’t say that lightly, ’cause I’ve heard them all.”

Another said he came in supporting Bernie Sanders, but is now voting Trump. He told Luntz, “I feel patriotism. I feel completely safe. I feel there is love of country, and with a leader like Donald Trump who believes in the people, the chaos in this country will turn to unity.”

Closing the four-day convention in Cleveland, Trump pledged that as president he’ll end crime and violence around the country, and said he would speak for those who don’t feel they are heard by government.

In an appeal to Americans shaken by violence at home and around the world, Trump promised that under his presidency, “safety will be restored.”

He stuck to the controversial proposals of his primary campaign, including building a wall along the entire U.S.-Mexico border and suspending immigration from nations “compromised by terrorism.”

But in a nod to a broader swath of Americans voting in November, he vowed to protect gays and lesbians from violence and oppression, and said he would ensure that young people in predominantly black cities “have as much of a right to live out their dreams as any other child in America.”

In typical Trump fashion, he cast himself as the only one who could solve America’s problems.

“No one knows the system better than me,” he said. “That’s why only I can fix it.”

Still, he set aside much of his usual bravado. As the crowd, fiercely opposed to Clinton, broke out in its oft-used chant, “Lock her up,” he waved them off, and declared, “Let’s defeat her in November.”

He was introduced by his daughter Ivanka, who announced a childcare policy proposal that the campaign had not mentioned before.

“He will focus on making quality childcare affordable and accessible for all,” she said.

Trump said he will overhaul tax laws and energy rules, get rid of regulations and decrease taxes, and said he will not sign “bad” trade agreements.

“I have made billions of dollars in business making deals – now I’m going to make our country rich again,” he said.

What was your reaction to Trump’s acceptance speech last night?