Trump: Gun-free zones are "bait" for killers - The Horn News 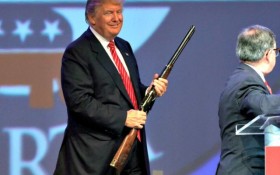 Keeping guns out of the hands of Americans doesn’t make us safer — it makes us sitting ducks.

That was the message that billionaire GOP hopeful Donald Trump sent at a Vermont rally yesterday, as President Obama took to the airwaves to try to sell new gun-control measures.

Last evening Obama participated in a CNN town hall to try to convince wary Americans to back a series of executive orders on gun control that he announced this week.

But just as Obama was taking the stage, Trump told attendees in Burlington that an increased focus on reducing gun ownership is making us all less safe. Trump took aim at Obama’s executive orders and the gun-free zones at schools and military bases.

“You know what a gun-free zone is for a sicko? That’s bait,” Trump told the crowd.

Trump vowed to sign an order ending gun-free zones on military bases as president.
The notion of whether gun-free zones truly save lives has long been controversial. A 2014 study by the Crime Prevention Research Center found that 92 percent of mass shootings over a five-year period occurred in gun-free zones, where victims were unable to defend themselves.
The Associated Press contributed to this report.
View older comments