Trump demands Kasich drop out of race - The Horn News 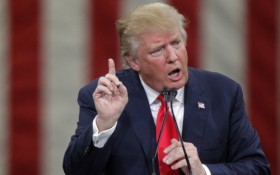 Republican presidential frontrunner Donald Trump had a tough week at the polls, but still says he’s an automatic lock for the White House — if Ohio Gov. John Kasich would do the honorable and fair move of dropping out.

Trump is pushing rival Kasich to get out of the White House race, arguing that the Ohio governor shouldn’t be allowed to collect future delegates because the nomination is already beyond his grasp.

Trying hard to right himself after a difficult week, Trump said it was unfair for Kasich, the winner of only his home state’s primary, to continue campaigning. He suggested that Kasich, who has pledged to make it to the summer convention, follow the lead of former candidates Marco Rubio and Jeb Bush — and quit.

“If I didn’t have Kasich, I automatically win,” Trump said Sunday evening in West Allis, Wisconsin.

Trump said Kasich could ask to be considered at the GOP convention in Cleveland in July even without competing in the remaining nominating contests. He said earlier Sunday that he had shared his concerns with Republican National Committee officials at a meeting in Washington this past week.

Trump’s call for Kasich to bow out came as Republican concerns grew about the prospect of convention chaos if Trump fails to lock up his party’s nomination — or even if he does.

Behind Texas Sen. Ted Cruz in the polls in Wisconsin, Trump faces the prospect that a loss on Tuesday there will raise further doubts that he can net the needed delegates, making it far easier for his party to oust him in a floor fight at the convention in Cleveland in July.

Kasich acknowledges that he cannot catch up in the delegate race, leaving a contested convention his only path to victory. He has faced calls in the past to step aside, but those nudges became less frequent following his decisive victory last month in his home state.

Still, Kasich suggested that a contested convention would not involve the chaos that party leaders fear.

Republicans fear a bruising internal fight would damage the party in November’s general election. Trump also isn’t ruling out the possibility of running as an independent if he isn’t the nominee, making it that much harder for the GOP to retake the White House.

Such talk has “consequences,” said GOP Chairman Reince Priebus, though he tried to quell the prospect of a convention fight. He told ABC that the process will be clear and open, with cameras there “at every step of the way.”

Frustration with the GOP field has stoked calls in some Republican corners for the party to use a contested convention to pick someone not even on the ballot. Priebus acknowledged that was a remote possibility, but said he believed his party’s nominee would be “someone who’s running.”