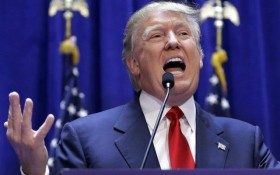 Love him or hate him — but you’d better start taking billionaire GOP hopeful Donald Trump at his word.

Trump’s first television commercials have begun to hit the air this week, and pundits who were expecting to see a softer, more toned-down side of Trump are going to be sorely disappointed.

In the 30-second spot, Trump doubles down on his assertion that America needs a border wall and that Mexico will pay for it.

And he makes clear that he’s serious about instituting a temporary ban on Muslims emigrating to the United States, a position that has drawn considerable heat from Trump’s Democratic and Republican opponents.

To watch the commercial everybody is talking about, just click below.