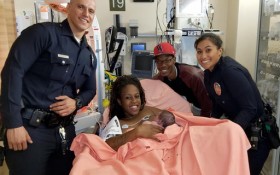 This wasn’t your typical traffic stop.

Two Los Angeles police officers pulled over a speeding car on Mother’s Day to find a woman about to give birth and a frantic man behind the wheel.

When they arrived, one officer alerted the medical staff. But before doctors could get to the mother-to-be inside the car, she gave birth to a healthy boy with the assistance of the other officer.

In a statement, police say, “Messiah Tindley was born on Mother’s Day, inside the vehicle escorted by LAPD officers.”

Police later issued a photo of the newborn inside the hospital with his beaming parents — Sasha Murphy and Mohammed Tindley — and the equally beaming officers.