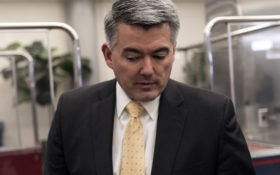 In July, Gardner announced his support for Kavanaugh and reaffirmed his support after reviewing an FBI report last week that did not corroborate any sexual misconduct allegations against the Supreme Court Justice.

On Sunday, the GOP senator revealed that his wife received a graphic text message and that his family members’ private information was shared publicly after he voted to confirm Kavanaugh.

Just hours after the Senate voted to confirm Kavanaugh in a 50-48 vote, Gardner’s wife received a graphic message with a video of a beheading.

According to the GOP senator, someone also posted the names and addresses of his family members on the internet.

Gardner is the latest politician to fall victim to “doxxing” after several other GOP lawmakers were targeted in recent weeks.

On Thursday, The Horn News reported that, “A Democratic congressional intern was charged and arrested on Wednesday for allegedly posting personal information of several senators last week.”

The congressional intern, Jackson Osko, was working for Democratic Rep. Sheila Jackson as he was stealing and releasing personal information of several GOP lawmakers.

The three senators that Cosko targetted all serve on the Senate Judiciary Committee. Senators Lindsey Graham, Mike Lee, and Orrin Hatch were questioning Kavanaugh over allegations of sexual misconduct while their Wikipedia pages were edited to include their addresses and phone numbers.

Now their families are living in fear.