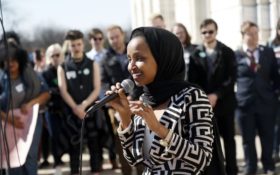 The far left liberals can’t wait to blame America for any catastrophe — and you can look for proof of this just south of the border.

When Venezuela’s socialist dictator sent a military vehicle to run over his own people, Rep. Ilhan Omar, D-M.N., decided it was time to throw the United States under the bus, too.

Most people who watched the sight of Nicolas Maduro squashing peaceful protesters who just wanted a better, freer life described him with a few choice words. Words like….

But another word came to mind for Omar: Victim.

On Wednesday Omar accused the United States of “bullying” the poor little dictator into mass murder.

President Donald Trump’s “bullying and the use of sanctions to eventually intervene and make regime change really does not help the people of countries like Venezuela,” Omar told “Democracy Now!” host Amy Goodman.

According to Omar, a rising star in the Democratic Party, the United States is to blame for “the devastation in Venezuela.”

The communist dictator shooting his own people in the street, the mass starvation, the 3 million people who have fled the country with nothing but the clothes on their backs?

Omar says that’s all your fault.

“You know, I mean, a lot of the policies that we have put in place has kind of helped lead the devastation in Venezuela, and we’ve sort of set the stage for where we are arriving today,” Omar said.

In her mind, a “a US backed coup” made the communist dictator do this.

Vice President Mike Pence was outraged at Omar’s anti-American comments. “As Venezuelans take to the streets to stand for their freedom against an oppressive dictator, Democrat Congresswoman @IlhanMN chooses socialism over freedom,” he tweeted. “The Trump Administration stands with the freedom-loving people of Venezuela.”

As Venezuelans take to the streets to stand for their freedom against an oppressive dictator, Democrat Congresswoman @IlhanMN chooses socialism over freedom. The Trump Administration stands with the freedom-loving people of Venezuela. https://t.co/UYiPLPvKl5

Omar has been making her pro-socialist pitch for months, and pointing the finger at the USA.

“Today, Venezuelan government officials can claim that the U.S. is waging an economic war and laying groundwork for direct confrontation,” she wrote in a letter to Trump. Sixteen

congressmen signed it, including Reps. Alexandria Ocasio-Cortez, D-N.Y., and Rashia Tlaib, D-Mich., who are both members of the Democrats Socialists of America.

It’s not exactly new for Omar to share Communist propaganda. She tweeted a video accusing America of “expanding the U.S. Empire.” And guess who produced that video? TeleSur, which is Nicolas Maduro’s state-run media service.

Hating on her adopted country is nothing new, either.

Omar thought she had buried a tweet from 2017, where she accused U.S. troops of killing “thousands” of Somalis during the Black Hawk Down attack in 1993.

But the number of Somalis killed probably never came anything close to “thousands” during that attack – more like 133, according to a representative of the Somali National Alliance.

To Omar, American soldiers were terrorists for defending themselves against terrorists…

But then again, she thinks America was built on terrorism.

“This is the country that was founded on the history of Native American genocide, on the backs of black slaves,” Omar screamed at a politically rally last week.

If you hate your country, you don’t care if it’s destroyed.

And when radical Islamic terrorists committed the worst act of terrorism in U.S. history, Omar just says that “some people did some things.”

If this country is so horrible, how could she serve it? She can only hope to destroy the Great Satan, as she calls it, from within.

Now, go back and re-read Omar’s quotes in this article assuming that’s her intention.

They make a lot more sense, don’t they?