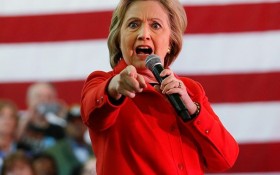 Despite numerous accusations of election fraud, dirty tricks and unfair party favoritism, Hillary Clinton is the presumptive nominee for the Democratic party. Even though her coronation as the Democratic presidential candidate didn’t go as smoothly as political analysts first predicted, Clinton heads to the Philadelphia Democratic convention in July as the clear party frontrunner.

But did the controversies surrounding her suspicious primary victories cost Clinton the last remaining goodwill of voters?

Poll after poll show Clinton rapidly losing ground against Republican nominee Donald Trump — and it’s quickly getting so bad, some top Democrats are afraid the Clinton nomination will be “a disaster.”

That’s according to Jarred Weaver, campaign manager of Vermont Sen. Bernie Sanders, in an email to voters, who cited Clinton’s increasingly poor reception among voters.

Weaver writes,”The Democratic Party must decide if they want the candidate with the momentum who is best positioned to beat Trump, or if they are willing to roll the dice and court disaster simply to protect the status quo for the political and financial establishment of this country.”

The warning comes after surprising exit polls in West Virginia primary illuminated a new bloc of voters: About a third of the Democratic primary voters revealed they would choose Trump in a general election matchup over Clinton.

“Donald Trump’s support has surged and he is now running nearly even with Democrat Hillary Clinton among likely U.S. voters, a dramatic turnaround since he became the Republican party’s presumptive presidential nominee,” according to a Reuters poll released on Wednesday.

Weaver said the Democratic Party and its superdelegates must reject Clinton and embrace Sanders soon — or face defeat at the hands of Trump in November.