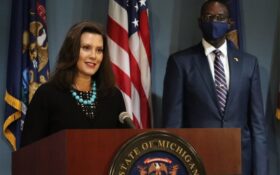 In a stunning reversal, one of the top up-and-coming Democrats has endorsed the main plank of President Donald Trump’s border security platform: Walls work.

Unfortunately, she wants a wall for her home, not your home or your country.

Michigan Gov. Gretchen Whitmer is building an eight-foot-tall, electrified fence around the governor’s mansion in Lansing. And she’s blaming her flip-flop on conservatives. Trump calls her a “liberal hypocrite.”

The $1.1 million security overhaul to Whitmer’s residence that will include “perimeter security and other safety upgrades” to keep uninvited visitors off her property, according to her office.

When Trump reportedly considered having the southern border wall electrified to keep out drug smugglers and human traffickers, Democrats called it as ridiculous and cruel.

But Gov. Whitmer’s spokesperson, Tiffany Brown, told The Detroit News that the high-voltage gate around her boss’ house is “needed to ensure the safety, security, and protection of any sitting governor and the first family.”

Whitmer has been one of the fiercest critics of President Trump’s border security policy—especially building a wall.

“Think how many kids that would educate, how many roads, bridges and pipes it would fix,” she added.

In 2018, Whitmer implied that border barriers are hateful and immoral. “It is time we get back to building bridges. Not walls,” she said.

$40 BILLION for the wall. Think how many kids that would educate, how many roads, bridges and pipes it would fix. https://t.co/R9HaqLAsMZ

“We must stand together, because when we do, we cannot fail. It is time we get back to building bridges. Not walls.” pic.twitter.com/TARxBlnKKW

Whitmer joins the list of liberal leaders who oppose a fence on the U.S. border but demand protection for themselves.

After weeks of violent looting and vandalism, Chicago’s Democratic Mayor Lori Lightfoot beefed up security around her own home and made protesting on her block a crime.

“We have a right in our home to live in peace,” she said.

Whitmer says she needs a private security fence due to an “explosion” of threats from conservatives protesting her strict coronavirus lockdown orders. But other liberal mayors are secretly admitting that the real threat comes from the Democratic Party’s own supporters.

Last week, a left-wing mob surrounded the home of Washington, D.C.’s Democratic Mayor Muriel Bowser in the middle of the night and threatened to “burn it down.”

Gov. Whitmer’s reversal is big news, since political insiders say she has a bright future in the Democratic Party. Joe Biden’s campaign began vetting the 49-year-old, who is the 49th governor of Michigan, as a possible vice president before choosing Sen. Kamala Harris Whitmer remains a Biden campaign surrogate.

And her new position on fences is even more ironic, considering that Whitmer has spent her entire political career advocating open borders for everyone else.

When Trump said the U.S. Census should not count non-citizens, Whitmer called it “hateful” and “discriminatory.”

When Trump restricted the number of Middle Eastern refugees coming to the United States after “refugees” performed numerous terrorist attacks overseas, Whitmer promised to keep Michigan “a welcoming state” and to “remain a leader” in accepting vast numbers of “globally displaced families and individuals.”

President called Whitmer a “liberal hypocrite who lives by a different set of rules” during a rally Thursday night in Michigan.

Whitmer’s decision to build a fence is an admission that Donald Trump’s border security policies work.

A study from the University of Illinois-Chicago found that “fence construction significantly decreases the size of the likely undocumented, Mexican-born population on the U.S. side of the border.”

A fence “reduces the migration rate to the United States by 27 percent” in the area where the fence is built, and building a fence in a nearby region cuts illegal immigration by “an additional 15 percent.”

Whitmer hopes her fence keeps 100 percent of unauthorized visitors out of her home.