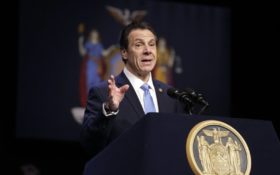 Statistics prove living under rule of a Democrat could be riskier.

The global pandemic of COVID-19 hits hardest in states or cities riddled with liberal policies.

New York state under liberal Democratic Gov. Andrew Cuomo accounts for almost one-third of all U.S. deaths from the Chinese flu. Citizens in locked down New York are almost 15-times more likely to die of coronavirus than people who live in Florida, where Republican Gov. Ron DeSantis has led the nation’s reopening.

But liberals said the goal was to “flatten the curve,” so hospitals could discharge patients and keep beds open. Now nursing home deaths account for 42% of all U.S. deaths from coronavirus, according to the Kaiser Family Foundation. They make up as much as 78% of Wuhan flu deaths in Rhode Island.

On March 25, Gov. Andrew Cuomo issued an order forcing elderly care facilities to admit people they knew had the coronavirus.

“No resident shall be denied re-admission or admission to the NH (nursing home) solely based on a confirmed or suspected diagnosis of COVID-19,” the statement read.

“Chaos followed that order and we have seen over 5,300 nursing home deaths throughout New York State, accounting for nearly 30% of all the total COVID-19 fatalities; a majority of which could have been avoided had the Governor, and his Health Department, used common sense,” said the chairman of the Conservative Party of New York State.

The virus killed the elderly and traumatized their families. Kathleen Cole, who lost her 89-year-old mother in a nursing home due to the virus, said, “My mother’s hands were blue — it wasn’t like a dusky shade blue, her nail beds were blue, her feet were blue, she was ice cold.”

In some facilities, deaths caused by the Chinese flu jumped by more than 500%.

But those numbers alone don’t tell the whole story.

State officials confirmed they were not counting nursing home patients who caught the virus there but died somewhere else, like in a hospital. That caused the number of deaths to shrink by 390% between reports…and it’s still sky high. Cuomo has since reversed his order but said nobody would be held accountable for the deaths, blaming them on “Mother Nature” and “God.”

At the time, there were less than 1,000 coronavirus cases in all the state’s nursing homes, assisted living centers, and other long-term care facilities. In less than two weeks thereafter, the number hit more than 5,200.

Officials walked back the policy on April 19, but the damage was done.

In Pennsylvania under Democratic Gov. Tom Wolf, more than two out of three of the state’s coronavirus deaths happen inside nursing homes, according to the state Department of Health.

Michigan Gov. Whitmer not only issued nursing homes to take in coronavirus patients, she extended hers until last week.

“How many died as a result?” asked Sen. Peter Lucido, R-Shelby Township. “They had no idea.”

He’s asked federal authorities to investigate Whitmer’s “reckless and negligent policy,” which “resulted in the illness and death of many of Michigan’s elderly.”

For the many Democrats who want to replace Joe Biden as their presidential nominee in the fall, a potential federal investigation is bad news.

But it pales in comparison to the thousands of senior citizen lives sacrificed at the hands of liberal policies.