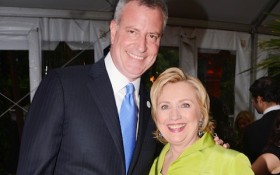 The same day his security team dragged a New York Post journalist out of a press conference for asking the wrong questions, New York City Mayor Bill De Blasio appeared on CNN to complain about the media.

But it wasn’t the biased mainstream media de Blasio wants shut down.

Hate and racism, de Blasio claims, was created by Fox News — and it makes him “very, very angry.” Now, he’s reaching out to New York City residents and urging them to “confront” any conservative media outlets.

De Blasio said he was a believer in free speech but told CNN “we have to be able to call out when a particular company has a corporate agenda, has a political agenda, and has very effectively changed the American discourse.”

And he says this on CNN of all places?

The same CNN that has consistently lied about the Russia investigation? The same CNN of the “Apples vs. Bananas” commercial infamy?

None of that seems to bother de Blasio. Instead, according to de Blasio, Fox News — and only Fox News — is to blame for “dividing people and creating hatred and negativity and changing our political landscape for the worse.”

“It’s fair to say that, when you look at CNN for example … they do not harbor a daily, hourly political agenda or bias,” de Blaso said, praising Stetler. “CNN on a regular basis provides both sides of the story. CNN… you can try and find some politics on CNN, but it doesn’t come close to the clear political agenda of News Corp.”

Stetler, it should be pointed out, once admitted on-air that he allows guests lie and present misleading ‘facts’ to viewers — but only if he agrees with their point.

De Blasio went on to say that hate and racism in the United States are the fault of Fox News and The New York Post, and that people should “confront what they’re doing to our country, and not simply stand ideally by.”

You can see the entire piece here —