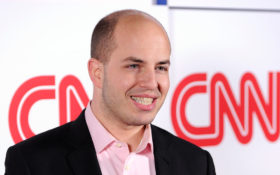 CNN host Brian Stelter seems very proud of what he does — even if he admits that it often includes sharing lies and misinformation with the American public.

And we have video proof of him bragging about it.

Shocking Clinton Marriage Rumor [sponsored]Sponsored: Thousands have THIS on their nightstand [DO YOU?]

When he was asked if he ever corrected the misinformation being broadcast on his show, Stelter admitted he only stopped to point out one lie or the many his guest was saying. The rest he broadcast without correction.

“At one of the times I did, and the other times I did not. There’s always that balance… how many times you’re going to interrupt,” Stelter said.

So why let his guest lie? Because he agrees with him of course.

“I think we have to recognize where David Hogg and Emma Gonzalez are coming from. There has been an increase in the lethality of mass shootings in recent years in this country. The so-called top ten list of horrors is very, very ugly and very recent. I do think they are trying to raise awareness of that,” Stelter continued.

In other words, if Stelter will gladly broadcast lies — if he agrees with his guests goals.

You can see the stunning confession below —