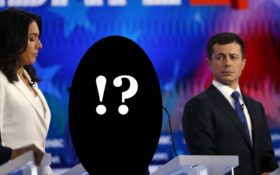 The latest installment in the never-ending 2020 Democratic presidential debates didn’t offer much in the way of substance on Wednesday.

But American voters couldn’t take their eyes off one candidate in particular — and what appeared to be her uncontrollable tremors had social media buzzing.

Every time she spoke her body seemed to fall into an uncontrollable fit.

Social media users speculated that the veteran congresswoman was going through a severe health meltdown.

You can see the video of her shaking here —

Several Twitter users even speculated that Klobuchar had taken after her Democratic colleague, Rep. Eric Swalwell, D-Calif., in trying not to let it rip.

“Holding in farts?” one user tweeted.

“Doesn’t want to let one loose like Swalwell,” another user added.

Others called for calm.

“klobuchar has been very visible shaking all night is she f****n okay,” wrote @LukisYT, before following up with, “i feel like this must be some sort of physical disorder. i can’t understand that just being anxiety.”

Klobuchar is literally shaking. I’m worried about her health #DemocraticDebate

Klobuchar, who narrowly qualified for the debate, hasn’t commented on the tremors.

According to a RealClearPolitics average of national polls, has just 1.7 percent of support from Democratic voters.

But if this bad case of the shakes is something more — something serious — she’ll likely be the next Democrat to drop out.

Maxine Waters gets weird when asked THIS question… (health meltdown!?)