Maxine Waters gets weird when asked THIS question... (health meltdown!?) - The Horn News 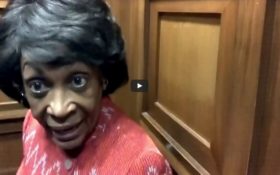 California Rep. Maxine Waters latest interview is going viral — because a wide-eye Waters’ strange behavior has both critics and supporters scratching their heads.

The footage even has some news outlets like The American Mirror asking: Is everything okay upstairs with Waters?

The camera, held by a reporter with the “Capitol Intel Group,” shows Waters and an aide meet the reporter in a hallway. They chat in a brief elevator ride with the congresswoman — and the footage shows Waters display some bizarre tics.

“There he is!” Waters and her intern exclaim when the reporter walks up to them in the halls.

“We’re getting Capital Bank on the Community Reinvestment Act! This stuff is making waves. Our story has been around the world,” the friendly reporter gushes, a reference to Waters recent Congressional work.

“It’s really important because people realize that like J.P. Morgan, who was doing … investments in the black community are making more money while, you know…,” the reporter said in front of the elevator.

That’s when Waters closed her eyes for several seconds, then opened  them with a strange, wide-eyed a look at the aide. The concerned intern quickly cuts off reporters questions.

Undeterred, the report follows Waters inside the elevator and tries to continue the interview.

“I’m doing a story on your historic win,” he said. “On being the next chairman of the National Services!”

“Of the Financial Services Committee!” the reporter responds.

The reporter continues to praise Waters on her historic win, and a confused Waters tells him “That’s right? That’s right.”

“We have all of Wall Street!” she says, before adding a typically canned political response. “Uhh… we have a chance to have some good, open discussions. To find out what we can do to better serve the American people.”

You can see the strange footage here —