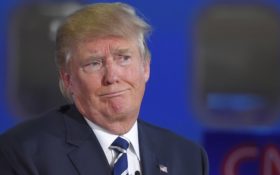 Since they lost the election, the media went all-out in their campaign to destroy Donald Trump’s presidency. But reporters are so hate-filled that they didn’t just peddle lies and distortions – sometimes they reported the most petty, idiotic and insignificant “news” stories like they were Pulitzer Prize winning bombshells.

Here’s a look back at 10 times this year when the media’s hysterical Trump-hating bias made them look and act like complete fools:

In May, CNN combed through a 100-minute-long interview  that Trump and Mike Pence gave to Time magazine on everything from Syria to how he wants to make peace with the media.

What did the Fake News network lead with?

Sometimes at dinner, “Trump takes two scoops of ice cream…while everyone else around the table gets just one.” Let’s face it: Trump deserves two desserts after the way he’s eaten the media’s lunch all year.

On October 1, Stephen Paddock carried out the worst lone shooting in U.S. history, killing dozens of fans at an outdoor country music concert in Las Vegas, and wounding 500 more before killing himself.

The Social Justice Warriors noticed something about Trump’s response: He regularly demands that Muslim terrorists be put to death…but not Paddock. Why would Trump want Islamists dead and not a rich, white guy? Racism!

Eli Stokolos, a reporter for the supposedly “conservative” Wall Street Journal, told MSNBC that Trump didn’t call for the death penalty because of his “ethno-centric nationalism.” GQ magazine ran a similar story.

I guess they all missed the part where Paddock was already room temperature – or, if you believe in Hell much, much warmer.

President Trump can get a Diet Coke at the push of a button, according to the New York Times – and sometimes he has as many as 12 a day.

As far as I’m concerned, that’s amateurish, but not a bad start. (And don’t forget to switch it up with some coffee every few cans.)

The Fake News went into a frenzy over whether that’s healthy.

All the old dinosaurs –The Washington Post, the Boston Globe, Time magazine and more – ran identically flat, tasteless stories about diet soda. Reporters hinted that Trump might have developed dementia. Even the usually conservative NewsMax claimed the drinks are “addicting.”

CNN went on such a Diet Coke bender that it stuck with the story after a Muslim immigrant tried to blow up the New York Port Authority. It’s just more proof that amnesty and Allah are deadlier than aspartame.

Donald Trump gives more public speeches than any president since the invention of television, and he keeps up a travel schedule that would kill men half his age.

But instead of praising his bond with the voters, the media obsessed over the fact that – a few times when he paused to take a drink of water – he used two hands to hold the glass. CNN host Chris Cuomo belittled Trump for using the “sippy cup grip” and embarrassingly demonstrated how he holds his glass “like a man, with one hand!”

A month earlier, in November, Newsweek ran a story promising “Scientific Poof That Trump’s Hands are Too Small to Hold a Water Bottle Like a Normal Adult.” The article had no science and no proof, not even measurements of Trump’s hand size. It just told readers to “Google ‘Trump drinking water two hands video’ and you can see that this is definitely a thing.”

What science! Einstein, Copernicus, eat your hearts out!

The Deep State doesn’t like it when real journalists expose its hidden conspiracies. Conservatives have begun asking whether the Trump-Russia investigation, dreamed up by pro-Hillary FBI agents just in case she lost, is a “coup.”

An angry MSNBC doubled down by warning that Trump is the one about to stage a coup…of his own government!

The Loony Left network interviewed a former George W. Bush lawyer who said Trump could use the military and crush the Constitution.

“The commander-in-chief is Donald Trump,” Richard Painter said. “There is a risk of him using that power to destroy our democracy.” Painter ranted that Trump is obstructing justice and is “psychologically deranged.”

Funny, it wasn’t Trump who used the IRS to shut down his enemies’ political organizations, the FBI to wiretap and indict the other party’s presidential campaign over a phony dossier, or the NSA to spy on literally every single citizen in the country.

During his Asia trip in November, CNN’s Veronica Rocha tweeted out a video of Donald Trump feeding fish, then dumping the entire bowl into the pond.

“Fish lovers gagged at the sight and wondered had Mr Trump left the koi carp — which cannot eat a large volume of food — sick or even killed them,” the international press reported.

But The Washington Post called Rocha out on her lie. She edited out footage showing that Trump following the lead of Japanese prime minister Shinzo Abe, like a good guest. You can see both clips here.

It’s a dog’s life for CNN. In November, “Erin Burnett Out Front” ran a segment reporting that “a dog named Chief has an ear that looks like Trump’s face.”

Sure enough, the British beagle had an inner ear that looked like a cartoon caricature of Trump’s profile – sorta. Before showing viewers the ear, reporter Jeanne Moos warned the snowflakes in the audience to “brace yourself,” because some people found the image “violently disturbing.”

Then she asked the beagle’s owner, Jade Robinson, “Is it an infection? What is it that looks like Donald Trump?”

It’s a stupid story unworthy of major news coverage, but CNN still managed to turn it into a slam on the president.

Sometimes the Trump-hating media extends its bias to family members or even staff. (Check out our next story, too.)

Newsweek actually ran a headline on November 29, saying: “Ivanka Trump plagiarizes one of her own speeches in India,” because Ivanka repeated certain words and phrases during her travels – like every politician does.

The story admits the First Daughter “is far from the first person to pull from their old speeches” but still says that it’s somehow “inauthentic.”

Ivanka Trump plagiarizes one of her own speeches in India https://t.co/nqrPl8R6cX pic.twitter.com/C5Ivw2fEbb

News flash to Newsweek: You can’t plagiarize yourself. Eventually, the bankrupt news rag changed the headline to say that Ivanka “recycles” her speeches.

Obama read the same script off teleprompters from one end of the globe to the other, and the media never reported it. If I had a dime for every lie he repeated, I could almost pay off the national debt he ran up.

2017 is the year the media went Pecan Pie Truther!

White House press secretary Sarah Huckabee Sanders has trashed biased reporters every day of the week with her take-no-prisoners attitude.

But when she tweeted out a picture of the pecan pie she made for Thanksgiving, it was too much for CNN’s April Ryan. The sight of the pecans drove Ryan nuts — and she accused Sanders of tweeting a stock photo:

Show it to us on a table. https://t.co/ifeSBlSZW7

I am not trying to be funny but folks are already saying #piegate and #fakepie Show it to us on the table with folks eating it and a pic of you cooking it. I am getting the biggest laugh out of this. I am thankful for this laugh on Black Friday! https://t.co/ifeSBlSZW7

Sanders settled “piegate” with grace and Southern hospitality. She made up several pecan pies and delivered them to reporters – including Ryan, who took the pie but said, “I’m not going to eat it.”

What a sour way to react to sweets.

Yes, all the rest of the stories are light-hearted, silly, or even downright ridiculous.

You’d have to be fairly demented to think these are worth your viewers’ time or attention.

But to spend an entire year obsessing over a fake intelligence report paid for by a political campaign, peddled by a hate-for-hire PR firm, and demonstrated to be full of lies time and again is the most embarrassing media misstep of our time.

Happy New Year! Here’s hoping 2018 brings us a little bit of truth from the Fake News Media – or, at least, a lot more laughs at their expense.