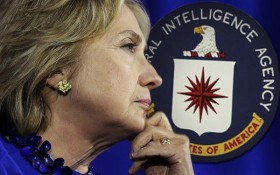 The witch hunt against President Donald Trump has taken an explosive turn, as new evidence proves officials at the highest levels of the Obama administration are using the Russian investigation as a coup against the President of the United States.

The shocking revelations show just how deep Democratic corruption in our government goes.

Everyone knows that Hillary Clinton’s failed presidential campaign and the Democratic Party paid the firm Fusion GPS to produce a phony dossier linking Trump to Russia. The lurid details contained in the 35-page dossier, code named “Bangor,” have never been verified.

But Hillary supporters didn’t just use it to smear Trump. Startling new details show they used it to launch the witch hunt they hope will drive him out of office.

It’s a revolution from inside the government – and you’re paying for it with your tax dollars.

As soon as the phony dossier was produced in July 2016, one of the highest-ranking officials in the Obama Justice Department showed it to his superiors and demanded action.

Ohr went on to hold meetings with the head of Fusion GPS – his wife’s boss – Glenn Simpson, where he may have coordinated how to bring down Trump.

That’s when the FBI magically started investigating “Russian interference in the election” – and distracting from numerous investigations into Hillary Clinton.

Now, a newly released trove of secret text messages show that Democrats at the highest echelons of government engaged in a massive miscarriage of justice to change the outcome of an election.

An immense conspiracy inside the Deep State

Pro-Hillary FBI agents looked at the fake Russian story as their “insurance policy” to destroy Trump in case he won.

Months before the election, FBI agent Peter Strzok sent this text message to his girlfriend and fellow investigator, Lisa Page:

“I want to believe the path you threw out for consideration in Andy’s office that there’s no way (Trump) gets elected — but I’m afraid we can’t take that risk. It’s like an insurance policy in the unlikely event you die before you’re 40…”

This text is the smoking gun that tears the lid off the way things really work in Washington!

Discussing politics on government property is a federal offense and the whole trio should be prosecuted to the full extent of the law. But there are bigger fish to fry.

That message proves the officials – who love Hillary and say that Trump supporters “smell” – met inside the bowels of the Deep State and used the fake dossier in their plan to get Trump impeached.

The Obama administration took the phony allegations that the Democratic Party paid top-dollar for and planted them like hand grenades inside the Trump administration.

Now that the details are out, the Deep State is circling the wagons.

Unelected “Justice” Department bureaucrats are stonewalling elected officials trying to get the facts.

DOJ officials refused to tell Congress whether Obama used the phony dossier to get a warrant to wiretap a high-ranking Trump presidential campaign official.

They won’t say if a campaign document Hillary paid at least $1 million for is the basis of a fruitless investigation into the sitting president.

The one man who could bring this circus to an end refuses. Rod Rosenstein, the number two man in the Justice Department, told Congress on Wednesday that there’s no reason to fire special prosecutor Robert Mueller or question his fairness.

The investigation is going great, he said. Nothing to see here!

Imagine how deep corruption runs when Donald Trump runs the FBI, but he can’t even get it to start rooting out Obama- and Clinton-tied criminals.

A few patriots are demanding that DOJ officials face justice. Jay Sekulow, and Congressmen Matt Gaetz and Jim Jordan have called for a special investigation…into the investigation.

Insiders have warned President Trump that he has to fight back against the Deep State if he wants to survive. There are too many questions we need answered, right away:

How many other agents are in on this conspiracy?

How many laws did they break?

How high does the conspiracy go? Did Obama, his first lady, or Valerie Jarett, know – or direct – agents effort to pervert justice?

How many of Obama’s other investigations were based purely on politics?

Tearing out corruption root-and-branch has to be Trump’s top priority. The agents responsible for this have to be fired and permanently lose their pensions and federal benefits.

Patriotic Americans need to support Trump’s fight against Deep State corruption every step of the way.

After all, he’s fighting for us… and democracy.