5 biggest media LIES about Trump... this month! - The Horn News 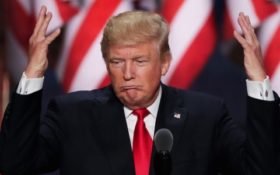 This month the media threw everything they had into destroying President Donald Trump… but all they trashed was their already tarnished reputations.

The rate of outright lies the media told about the Trump administration hit an all-time high this month. So far, it’s more than one massive lie per week – and counting.

Here are the biggest examples from December 2017:

The New York Times claimed it uncovered an e-mail from a Trump adviser just after the election confessing that Russia had rigged the presidential election.

Since Obama slapped new sanctions against Russia for “interfering” in the election, Trump adviser K.T. McFarland wrote that “Trump will have difficulty improving relations with Russia, which has just thrown USA election to him.”

The Left took the Fake News report as proof that Russian rigged the election – and Trump’s team straight-up admitted it!

But they left out one important fact: McFarland’s e-mail just explained how the Democrats saw Obama’s sanctions – that they were happy to destroy U.S. relations with Russia if it hurt Trump. She wasn’t writing about what actually happened.

Lie #2. Michael Flynn would testify that Trump colluded with Russia.

Brian Ross started off the month by reporting an “exclusive” that would have drummed Trump out of office. He heard that a former high-ranking official would testify that Trump tried to bribe Russia into interfering in the 2016 election.

First thing on the morning of December 1, ABC “News” claimed that General Michael Flynn would testify Trump had “directed him to make contact with the Russians” before election day. He’d say that Trump offered favors to a foreign country to help him get elected.

It was also a lie.

That night, Ross admitted that Trump only told Flynn to contact Russia after the election – just like every other president-elect in history.

Obviously, Russia couldn’t have tampered with an election that already happened.

ABC admitted this was a “serious error” and suspended Ross for four weeks without pay.

The president of ABC News was livid that his “chief investigative reporter” blew another story. He told his employees, “We will all pay the price for a long time.”

One week after the Ross fiasco, CNN decided to earn its reputation as “fake news.” It reported that a shady source e-mailed Donald Trump Jr. a code that would give him access to the WikiLeaks documents – nine days before they went public.

WikiLeaks exposed damaging and discrediting emails from inside the Clinton campaign. The media claim that WikiLeaks got these documents from Russia – although there’s no proof and Julian Assange denies the claim.

The documents weren’t made public until September 13. But CNN said the e-mail was dated September 4. And Trump Jr. had tweeted about WikiLeaks on September 4.

In CNN’s world, all the dots connected!

This was “proof” that Russia hacked the Democrats, gave the e-mails to WikiLeaks, then told the Trump campaign to use them in their campaign against Hillary.

It was a huge Russian conspiracy.

The problem: The e-mail was sent on September 14th, not the 4th.

WikiLeaks released all its documents publicly on the 13th. This was just a “heads-up” from a fan who was a day late to the party, not secret collusion from the KGB.

Lie #4. The federal investigation has “zeroed in” on Trump personally!

Bloomberg News – owned by Trump-Hater Michael Bloomberg – reported that Robert Mueller was about to close the noose on Donald Trump himself.

Mueller had “zeroed in” on Trump and his family, demanding that a German bank produce his financial records.

Deutsche Bank had loaned Trump and associates $300 million over the years to finance his real estate deals.

The reporting gave the impression that Russia had used the bank to funnel bribes to Trump, and the loans were an elaborate money-laundering front.

Bribery would get Trump impeached in a New York minute.

But there’s a problem: Mueller never issued a single subpoena about Trump or his family.

“No subpoena has been issued or received. We have confirmed this with the bank and other sources,” she said. “I think this is another example of the media going too far and too fast.”

Eventually the truth came out: The target was Paul Manafort, the liberal Establishment Republican who tried to run grassroots conservatives out of the Trump campaign.

On December 8, President Trump spoke before a capacity crowd in Pensacola, Florida. At one point, he said the place was “packed to the rafters.”

That triggered Washington Post reporter Dave Weigel, who tweeted a photo of a mostly empty arena to his 401,000 Twitter followers.

But the picture was a fraud. It taken before most of the crowd had been let in.

Weigel knew it was a lie. He just wanted to anger the president – and he thought he could get away with it.

Instead, Trump brought down the hammer on his disinformation:

.@DaveWeigel @WashingtonPost put out a phony photo of an empty arena hours before I arrived @ the venue, w/ thousands of people outside, on their way in. Real photos now shown as I spoke. Packed house, many people unable to get in. Demand apology & retraction from FAKE NEWS WaPo! pic.twitter.com/XAblFGh1ob

Weigel’s tweet proves that there is nothing too small or petty for the media to lie about, in order to attack the president.

It’s time to tune them out and listen to reliable news media, like The Horn News.

If you haven’t yet had a chance, make sure to sign up for our daily newsletter. Click here now.

— Frank Holmes is a reporter for The Horn News. He is a veteran journalist and an outspoken conservative that talks about the news that was in his weekly article, “On The Holmes Front.