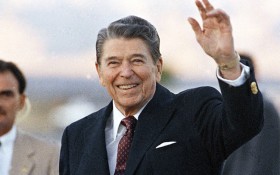 Career politicians familiar with the national stage like Jeb Bush, Scott Walker, Marco Rubio, and Rand Paul will be well prepped. But three candidates: Ben Carson, Carly Fiorina, and even Donald Trump are more used to the world of business, not debate. That leaves them vulnerable to a technique Reagan used so effectively in the 1980 debates – The simple verbal jab.

Thursday’s historic presidential debate is between a hugely crowded fields. In such a crowded field, context don’t matter as much as confidence. Time is limited, so audiences are looking a leader, not just ideas.

A leader is confident, cool, and collected. Candidates that get desperate to make an impression of his or her knowledge will get long-winded. Rants are dull and uninspiring, and are a classic debate trap for passionate but inexperienced candidates with limited airtime.

Reagan famously destroyed Jimmy Carter in their first debate during the 1980 election after Carter fell into such a trap. Carter, asked about health insurance reform, was feeling the pressure. So he launched into an overly long explanation. What Reagan did and didn’t do, his idealism, what’s right and what isn’t. He pushed on and on to make his point.

Reagan let Carter run out of steam, then simply turned to Carter and said, “There you go again!”

It was humiliating. It stripped away the image of Carter’s confidence, and rang out true to the voting public. Using four simple words, Reagan landed a well-timed jab that showed his superior confidence; the voters saw a man suited to lead. By contrast, Carter now seemed long-winded, dull, and slow; someone better suited for idealism than the Presidency.

On Thursday, every candidate is going to be fighting to make an impact. They each need to get noticed – and soon – if their presidential campaign is going to gain traction. They’ll be looking to make a big splash with a great sound-bite.

Inexperienced candidates won’t be able to help themselves, and could fall into the trap. Used to listening to a captivated board room, he or she will get passionate about a particular issue, try to mold it around a crucial sound-bite… and will be made to look foolish by a short, stinging verbal jab from an opponent hardened by years of politics.

In a debate crammed with ten candidates, a series of well-placed jabs will be better suited than heavy, long verbal retorts. Simple sound-bites, like Reagan’s “There you go again!” will be the ones GOP voters remember for years to come.

Those impressions will determine the ultimate winner, and the losers.

MUST WATCH – Check out the “Reagan jab” below