The crying game? Obama tears up over gun plan - The Horn News 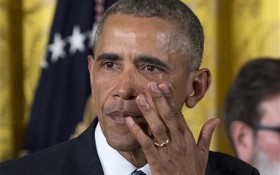 A good, public cry may have cost Edmund Muskie his 1972 bid for the presidency and led to questions about his composure.

But welcome to 2016 — and the new, softer side of American politics.

Tears streaking his cheeks, President Barack Obama launched a final-year push Tuesday to tighten sales of firearms in the U.S.

The president struck a combative tone as he came out with plans for expanded background checks and other measures that have drawn consternation from gun rights groups.

Tears were clearly visible on Obama’s face as he talked about victims of gun violence, including the children killed at Sandy Hook Elementary School three years ago. mad.”

Obama’s 10-point plan to keep guns from those who shouldn’t have them marked a concession by the president: He’ll leave office without securing the new gun control laws he’s repeatedly and desperately implored Congress to pass.

Although Obama, acting alone, can take action around the margins, only Congress can enact more sweeping changes.

The National Rifle Association, the largest gun group, panned Obama’s plan and said it was “ripe for abuse.” Even Sen. Joe Manchin, a Democrat and gun-owner who co-wrote the bipartisan bill Obama supported in 2013, took issue with the president’s move.

“Instead of taking unilateral executive action, the president should work with Congress and the American people, just as I’ve always done, to pass the proposals he announced today,” Manchin said.

The centerpiece of Obama’s plan is an attempt to narrow the loophole that exempts gun sales from background checks if the seller isn’t a federal registered dealer. With new federal “guidance,” the administration is clarifying that even those who sell just a few weapons at gun shows, flea markets or online can be deemed dealers and required to conduct checks on prospective buyers.

Millions of guns are sold annually in informal settings outside of gun shops, including many through private sales arranged online. But the Obama administration acknowledged it couldn’t quantify how many gun sales would be newly subjected to background checks, nor how many currently unregistered gun sellers would have to obtain a license.

Obama readily conceded the executive steps will be challenged in court, a prediction quickly echoed by Republicans.

Chuck James, a former federal prosecutor who practices firearms law at the firm Williams Mullen, said opponents are likely to challenge Obama’s authority to define what it means to be “engaged in the business” of selling guns beyond what’s laid out in the law.

Other new steps include 230 new examiners the FBI will hire to process background checks, aiming to prevent delays that enabled the accused gunman in Charleston, South Carolina, to get a gun when the government took too long.

“Rather than focus on criminals and terrorists, he goes after the most law-abiding of citizens,” said House Speaker Paul Ryan, a Republican. “His words and actions amount to a form of intimidation that undermines liberty.”