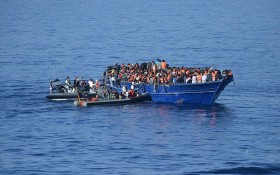 For months, intelligence groups around the world have warned that terror groups could be exploiting the European migrant crisis to sneak extremists into the West. And Italian authorities have just announced that they apprehended an Al Qaeda leader who has also been linked to ISIS trying to sneak into the country.

The Tunisian, Ben Nasr Mehdi, was first arrested in 2007 in Europe and sentenced to seven years in prison for planning terror attacks in coordination with ISIS extremists. While in custody, Mehdi was held in the high-security Benevento prison in southern Italy. Following his prison term he was expelled from the country and forbidden from returning.

Last month, he attempted to sneak back into the country among 200 migrants whose boat had to be rescued by Italian authorities in the Mediterranean Sea.

Mehdi attempted to use a fake name to get past, but was caught when his authorities identified his finger prints, according to a report from The Independent.

More than 770,000 people have arrived in the EU by sea so far this year, overwhelming border authorities and reception facilities. Many have used boats, while others have made the arduous land journey on foot through the Balkans in search of sanctuary or work in countries like Germany, Italy or Sweden.

The EU’s 28 member nations have pledged to provide experts and funds to help manage the emergency, and to share refugees among them.

To help manage the influx, EU border agency Frontex has called for 775 extra officers, but member states have so far only offered about half that amount. Slovenia asked for 400 more police officers within a week to help out. Almost three weeks later, less than half has been pledged.

Luxembourg Foreign Minister Jean Asselborn said the ministers had discussed setting up “processing centers” in the Balkans, where people could be registered and given information as they travel further north. But they would also have to accept to have their fingerprints taken, which some migrants are refusing to do.