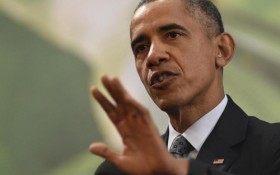 Authorities have a message for U.S. civilians in southern Turkey: Get out now.

The State Department and Pentagon have ordered the families of U.S. diplomats and military personnel Tuesday to leave posts in southern Turkey due to “increased threats from terrorist groups” in the country.

The two agencies said dependents of American staffers at the U.S. consulate in Adana, the Incirlik air base and two other locations must leave right away. The so-called “ordered departure” notice means the relocation costs will be covered by the government.

Pentagon press secretary Peter Cook said the order was made “out of an abundance of caution” for the safety of the families in that region. He said that relocation efforts “will move very quickly.”

The evacuation orders come among warnings that an ISIS terror attack in southern Turkey could be days away. There has been speculation that Jewish students or schools could be especially targeted.

The orders cover the Adana consulate, U.S. military dependents in Incirlik, Ismir and Mugla as well as family of U.S. government civilians at Ismir and Mugla. The State Department also restricted official travel to that which it considers “mission critical.” Cook said that the order does not affect about 100 family members who are based in Istanbul and Ankara.

The move comes amid heightened security concerns throughout Turkey due to the ongoing fight against Islamic State militants in neighboring Syria and Iraq and was accompanied by an updated travel warning advising U.S. citizens of an increased threat of attacks. It also comes as Turkey’s president is set to arrive in Washington to attend President Barack Obama’s nuclear security summit.

“We understand this is disruptive to our military families, but we must keep them safe and ensure the combat effectiveness of our forces to support our strong ally Turkey in the fight against terrorism,” the European Command statement said.

Incirlik is a critical base in the fight by the U.S.-led coalition against the Islamic State group, and includes strike aircraft, drones and refueling planes.

Turkey’s decision last year to allow the coalition to conduct airstrikes with aircraft based at Incirlik shortened the time and distance required to conduct airstrikes in Syria and Iraq, compared with strikes flown from bases in the Persian Gulf area. And it increased the number of U.S. personnel at the base.

NATO’s Allied Land Command is based at Ismir and there is a Turkish base at Mugla where some U.S. military personnel go for training and other missions.

It was not immediately clear how many family members would be affected in total. The Pentagon said the order would affect about 680 military family members and roughly 270 pets. The State Department and Pentagon had begun a voluntary drawdown of staff at the two posts last September after Turkey announced it would take a greater role in the fight against Islamic State militants.