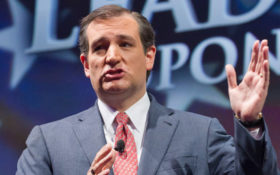 “Do you believe that what the president did with Ukraine was somehow tough on Russia? Or didn’t the president, just by introducing all of this delayed aid, play into the hands of Russia?” Todd asked.

“You know, Chuck, substance matters,” Cruz responded. “By any measure, the president’s policy — this administration’s policy — has been tougher on Russia and, actually, better for Ukraine than Obama’s was.”

“I traveled to Ukraine,” Cruz said. “I went to the Maidan Square in Kyiv and they needed lethal aid — but the Obama administration sent teddy bears and [food]. They wouldn’t actually give weapons.”

“What garbage,” Cruz said. “What nonsense!”

Democrats know they can’t prove anyone in the Trump administration committed a crime, he said.

“Here’s why: any president, any administration is justified in investigating corruption — and there was serious evidence of real corruption concerning Hunter Biden, on the board of Burisma, the largest natural gas company in Ukraine,” Cruz continued.

“I believe any president, any Justice Department, has the authority to investigate corruption,” Cruz responded. “In this case, there was serious evidence on the face of corruption.”

“The reason Hunter Biden got that position is because that his daddy was Vice President of the United States. If he was Hunter Smith they wouldn’t pay him a million dollars a year to serve on the board,” he said.