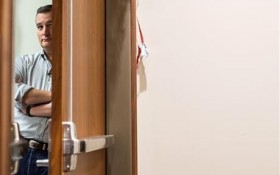 Ted Cruz brought his pro-gun, anti-establishment message to a receptive audience at a packed pasta restaurant in New Hampshire on Sunday, the beginning of a five-day swing the Texas senator hopes will help him eat into rival Donald Trump’s advantage in the state.

Cruz is trying to bring religious and social conservatives together with pro-gun libertarians for a stronger-than-expected finish in New Hampshire’s primary on Feb. 9. His 17-stop tour attracted hundreds of people at the kickoff event Sunday night in Milford, known as “the granite town in the Granite State” for its proliferation of quarries.

Cruz tried to position himself as the most sincere conservative in the race, building on his recent attacks against Trump as only a recent convert to the GOP.

“Everyone says they’re a conservative,” Cruz said. “Don’t listen to what I say, or they say. Ignore what any of us say on the campaign trail. Look to our actions.” Cruz cast himself as the most willing to fight with both Republicans and Democrats in the Senate.

Cruz received a standing ovation and occasional shouts of “Amen!”

“He represents us — tea party America,” said Mike Walker, a police officer from nearby New Ipswich, New Hampshire. He wore a Second Amendment button to the event and said protecting gun rights was his priority issue, along with securing the nation’s borders.

Walker also likes that Cruz has frequently butted heads with Republicans and party leadership. And while he also likes Trump, Walker said he prefers Cruz because he’s stronger on gun issues and not as big of a “wildcard” as the billionaire from New York.

Cruz’s trademark anti-establishment pitch, filled with quotes from scripture and support from evangelical leaders, has thus far served him well among conservatives in Iowa, where he’s locked in a narrow race with Trump ahead of the Feb. 1 caucus. But Cruz hopes a strong finish there would spark momentum in New Hampshire a week later — and beyond.

Cruz held a pro-gun event at a New Hampshire shooting range last week and hit that issue hard in his pitch to Milford voters Sunday night. Cruz highlighted his support for the Second Amendment just two minutes into his stump speech, eliciting cheers from the hundreds who came to see him.

The first-term senator’s backers say his message can consolidate enough conservative support to do well in New Hampshire, which tends to favor more moderate Republicans. As Trump surges ahead of his rivals in state polls, the rest of the GOP field is scrambling to grab whatever support remains.

“Often conservatives are just all over the place and they dissipate their strength by spreading it out across too many candidates,” said New Hampshire state Rep. Bill O’Brien, a state co-chair for Cruz.

Michael Plesac, an engineer from Brookline, New Hampshire, said he liked Cruz, but he was still considering three or four other Republicans, including Florida Sen. Marco Rubio.

“This year I really don’t know who to vote for,” Plesac said Sunday.

While Cruz had a quick stopover in New Hampshire last week, more than two months have passed since his last visit. The senator instead has poured his time and resources into states like Iowa, where he is surging against Trump. But with his poll numbers rising in New Hampshire, Cruz is banking on the bus tour to give him a boost.

Cruz drew cheers Sunday, just as he does in Iowa, when he talked about plans to repeal President Obama’s health care law, implement a flat tax, abolish the IRS and Education Department, build a wall along the Mexican border paid for by Trump and eliminate cities that won’t cooperate with immigration investigators.

Cruz also recited Scripture and exhorted voters to pray for him and the country at least one minute a day before voting.

Walker said he wasn’t looking for an overtly religious message from Cruz.

“My religion, my Bible, is the Constitution,” Walker said. “That supersedes all else.”

But some of the state’s Christians say they hope Cruz’s message of faith will inspire voters.

“In the last election, there were so many … registered Republicans who are evangelicals who did not come out and vote,” said Andrew Dean, a New Hampshire pastor who leads a church of roughly 125 members.