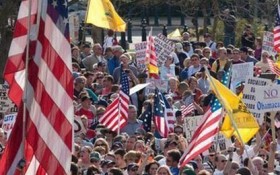 A band of tea party conservatives say they won’t back legislation financing government agencies unless the bill blocks federal payments to Planned Parenthood. Mainline Republican congressional leaders are desperate to avoid government shutdowns this year. But they may not have a choice.  A partial shutdown will occur Oct. 1 unless lawmakers provide money to keep government functioning.

Is this the beginning of a Republican civil war over abortion? With time running out, GOP leaders haven’t said how they will handle conservatives’ demands while also rounding up enough votes to prevent a shutdown.

Conservative and Republican revulsion for Planned Parenthood and abortion was reignited this summer by secretly recorded videos showing organization officials offhandedly discussing how they sometimes provide tissue from aborted fetuses for medical researchers.

Keeping conservatives happy and prompting large numbers of them to vote in next year’s presidential and congressional elections is good for the GOP. Conservatives are among the party’s most loyal and numerous voters.

Advancing a bill that finances government agencies but blocks Planned Parenthood’s money is seen by the tea party as one way to do that.

Such a bill probably would pass the GOP-run House. But Senate Majority Leader Mitch McConnell, R-Ky., acknowledges that he lacks the votes to prevail in his chamber and says President Barack Obama would veto it anyway.

That makes GOP leaders reluctant to force a doomed standoff with Obama that could result in a shutdown and alienate pivotal independent voters. The public mostly blamed Republicans in 2013 when a partial shutdown lasted 16 days after they tried dismantling Obama’s health care law in exchange for keeping agencies open.

“Having charged up the hill once and been shot down, why would you want to do that again?” said Rep. Tom Cole, R-Okla., an ally of House Speaker John Boehner, R-Ohio. “I’m pretty convinced we’re not going to shut down the government.”

Congressional leaders’ immediate problem is Mulvaney. If his group of 31 holds and Republican leadership still want to pass a bill preventing a shutdown and funding Planned Parenthood, that means the GOP mainliners would need Democratic votes.