Supreme Court to smack down Obama on illegals? - The Horn News 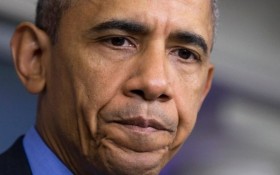 One of President Barack Obama’s highly controversial executive orders is officially heading to the Supreme Court to face judgement. The highest court in the land stepped into a boiling political dispute over immigration Tuesday, setting the stage for a likely decision in June – right in the middle of the 2016 presidential campaign.

And should the Supreme Court’s judgement follow the lower courts’ lead, many of Obama’s other executive orders could be in serious trouble.

The justices agreed to review whether President Obama, acting without congressional approval, has the power to shield up to 5 million immigrants living in the U.S. illegally from deportation and make them eligible to work without fear of being rounded up.

The justices also said they would consider whether Obama exceeded his authority under federal laws and the Constitution.

Some legal observers saw in the court’s decision to look at Obama’s power under the Constitution a potentially ominous sign for the administration’s use of power.

“It suggests that the court is willing to engage President Obama’s entire use of executive orders,” said Jeffrey Rosen, president and CEO of the nonpartisan National Constitution Center. Obama frequent use of these executive orders has long been criticized as illegal overreach by his Republican rivals.

Underscoring the political dimension, the case will be argued in April and decided by late June, about a month before both political parties gather for their nominating conventions.

When he announced the measures 14 months ago, Obama said he was acting under his own authority, circumventing Congress because the legislative branch had failed to overhaul the immigration system the way he wanted.

Texas quickly led a legal challenge to Obama’s program on behalf of 26 states and has won every round in court so far. Most recently, in November, the 5th U.S. Circuit Court of Appeals ruled in favor of the states, prompting the appeal to the Supreme Court.

Texas actually asked the Supreme Court not to hear the case challenging those rulings, but state Attorney General Ken Paxton said he was pleased the justices will examine the president’s constitutional power to intercede without congressional approval. “In deciding to hear this case, the Supreme Court recognizes the importance of the separation of powers,” Paxton said.

The administration said Texas and the other states don’t even have the right to challenge the plan in federal court.

However, the lower courts decided that Texas does have the right, or standing, to sue because at least 500,000 people living in Texas would qualify for work permits and thus become eligible for driver’s licenses, the costs of which are subsidized by the state. “Texas would incur millions of dollars in costs,” the state said in its brief.