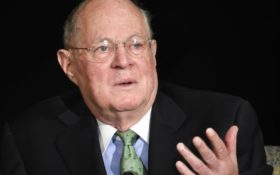 With the tragic death of Supreme Court Justice Antonin Scalia and President Donald Trump’s victory in the presidential election, Trump has already had the honor to nominate a Supreme Court judge. But is it about to happen again!?

Rumors are swirling that 80-year-old Justice Anthony Kennedy is set to announce his retirement sometime soon.

While Kennedy himself has yet to comment, Trump and the Republican senator in charge of high court confirmation hearings are weighing in on the prospect that Kennedy could step down as soon as this spring or summer.

If not this year, several former law clerks said they would not be surprised to see the justice retire in 2018.

“I’ve heard the same rumors that a lot of people have heard. And I have a lot of respect for that gentleman, a lot,” Trump told The Washington Times in an interview published Sunday.

Sen. Chuck Grassley of Iowa, chairman of the Senate Judiciary Committee, told reporters last month, “I would expect a resignation this summer.” He did not name any names but cited a “rumored” retirement.

Kennedy’s departure would give Trump a second Supreme Court vacancy and the chance to cement conservative control of the court for a decade or more. Justice Neil Gorsuch, Trump’s first nominee, joined the court last month.

Trump said he would choose from the same list of candidates he unveiled during the campaign from which he plucked Gorsuch.

Kennedy has been the crucial swing vote on the high court for more than a decade. He has sided with the liberal justices on gay rights and abortion rights, as well as some cases involving race, the death penalty, and the rights of people detained without charges at the Guantanamo Bay naval base. He has written all the court’s major gay-rights decisions, including the 2015 ruling that declared same-sex marriage is a constitutional right nationwide.

He also has been a key vote when conservatives have won major rulings on the outcome of the 2000 presidential election in favor of George W. Bush, gun rights, limiting regulation of campaign money and gutting a key provision of the landmark federal Voting Rights Act.

Kennedy scheduled his reunion of law clerks a year earlier than usual, on the last weekend in June. That change, first reported by the Above the Law legal blog, first fueled speculation that Kennedy is considering retirement. Kennedy sent his former clerks an invitation in September, two months before the election.

Supreme Court spokeswoman Kathy Arberg explained the earlier reunion as a chance to mark Kennedy’s 80th birthday before the justice turns 81 in July, but many are suspicious of her reasoning.

Some of the roughly 100 clerks who have worked for Kennedy at the Supreme Court thought there might be more to the change. One former clerk, speaking on condition of anonymity in adherence to long-held court tradition on clerk-justice relationships, said he thought the reunion was scheduled in that manner because of the thought that Kennedy would be retiring.

The same clerk said he also would not be surprised if Kennedy remains on the bench for another year.

Other clerks, who also would not agree to be named, said Kennedy naturally is considering retirement because he is past his 80th birthday and thinks that some of his colleagues remained in their jobs too long. A nominee of President Ronald Reagan, Kennedy also would prefer to be replaced by a Republican, those clerks said.

It is unclear how Trump’s election may have shaped Kennedy’s thinking. But he appears to have a warmer relationship with Trump and his family than was known or necessarily expected. Kennedy invited Ivanka Trump to a February argument at the court, where she and her daughter sat in a section reserved for justices’ guests. Kennedy’s younger son, Gregory, spent time on the Trump team that worked at NASA beginning with Trump’s inauguration. Trump and Kennedy themselves had a brief but warm exchange on the floor of the House of Representatives following Trump’s first address to Congress in February.

Few obstacles seem to stand in the way of confirming a new justice this year or next. Republicans control the Senate, and after changing the rules, have wiped out the filibuster for Supreme Court nominees and the need for 60 votes to defeat it.