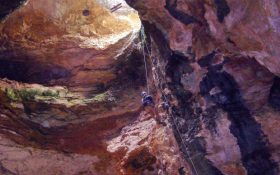 Paleontologists say they have enough funding for one more season of digging at a Wyoming cave where they’re carefully removing a trove of animal bones from the last ice age to discover their secrets.

Scientists led by Julie Meachen at Des Moines University in Iowa have been excavating fossils from Natural Trap Cave every year since 2014. This summer’s haul included wolf, bison, lion and cheetah bones.

Their work is enhancing knowledge about the kinds of animals that roamed North America around the end of the last ice age some 12,000 years ago.

The only way in or out of Natural Trap Cave is a 15-foot-wide hole in the ground. From there, it’s an eight-story drop to the cave floor.

Countless animals fell to their deaths into the cave over thousands of years.