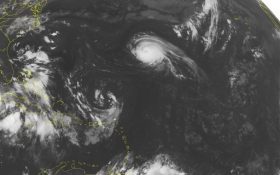 Multiple states are on edge as meteorologists warn that severe weather systems may be moving in and strengthening.

Hurricane Madeline and two tropical storms are threatening areas in Hawaii, North Carolina and Florida as the states prepare for possible damage from the heavy winds and rain.

The storm should be near or over the Big Island by Wednesday, said forecaster Derek Wroe.

At 11 p.m. Monday (2 a.m. PDT Tuesday), the center said the storm had strengthened to a Category 4 hurricane with maximum sustained winds near 130 mph.

The Center’s advisory on Madeline predicted it will pass “dangerously close” to the Big Island Wednesday and Wednesday night. But it added that some weakening is forecast through late Wednesday.

Hawaii isn’t the only state bracing for a big storm.

A tropical weather system off the coast of North Carolina’s Outer Banks is expected to strengthen in the next day, bringing winds up to 45 mph and heavy rains that could flood low-lying areas, officials said.

By Tuesday morning, the tropical depression with winds of 35 mph (55 kph) was about 85 miles (135 kilometers) south-southeast of Cape Hatteras and was expected to become a tropical storm Tuesday afternoon but not grow any stronger.

A tropical storm warning has been issued for areas of the coast from Cape Lookout to the Oregon Inlet along North Carolina’s Outer Banks.

National Weather Service meteorologist Shane Kearns in eastern North Carolina said in an interview that “anything is possible, but we’re not really seeing any kind of significant strengthening for the storm.”

At the same time, forecasters at the National Hurricane Center in Miami said that another tropical depression in the Gulf of Mexico could hit northern Florida as a tropical storm later in the week and possibly head toward the Atlantic coast. They cautioned that the storm’s exact path remained uncertain days in advance, but the storm was becoming better organized Monday night.

Beachgoers, boat captains and business owners waited warily for the storm to wash out one of the summer’s last busy weeks.

Tourists in North Carolina sought to take the approaching storm in stride.

Visitor Katherine Vega, 45, of Springhill, Tennessee, said she could handle a day indoors during her vacation. By Monday afternoon, she had already fled the Atlantic’s swelling waves and strengthening currents off Hatteras Island in Buxton.

“We were just knee-deep, and there were a few times where we had to run out because it kept sucking us in,” she said, adding she’d watch movies with her husband until the storm blows through.

“We came from Tennessee,” she said with a shrug. “There are tornado threats over there.”

“I would advise everybody to take a look at the weather,” Dare County emergency management director Drew Pearson said when asked whether visitors should keep their travel plans. “They need to make those decisions based on what they see in the weather forecast.”

The second depression was about 305 miles (495 kilometers) west of Key West, Florida, with maximum winds of 35 mph (55 kph). It was moving west, but forecasters expect it could curve back to the northeast in the coming days. Authorities at some locations in the Tampa-St. Petersburg area of Florida were hauling out sandbags Monday to offer residents amid predictions of heavy rains.

On North Carolina’s Outer Banks, business owner Jennifer Scarborough said her biggest concern was that the first storm could saturate the area before another blow by the second storm.

“The second storm is the one I’m more worried about,” she said. “I’m definitely keeping an eye on it and planning accordingly. … If we have a lot of rain in a short amount of time that could be a problem.”

Roads along the thin barrier islands are prone to flooding and damage from erosion, including the two-lane N.C. Highway 12 that is the area’s main north-south artery.

“N.C. 12, our lifeline on Hatteras Island, even in a winter storm has some challenges,” Pearson said.

Scarborough, who manages Hatteras Harbor Marina and owns the Harbor Deli next door, said she’s receiving concerned calls from customers and that some captains are canceling fishing trips for Tuesday and Wednesday. With Labor Day approaching, the week represents one of the last busy stretches of summer for the area.