Massive storm set to SLAM the South - The Horn News 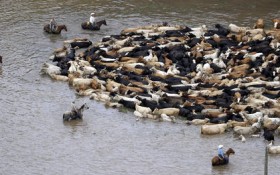 Tropical Storm Colin was gaining speed and strength Monday on its way to strike Florida, threatening rains forecasters said could cause some serious flooding along much of the state’s Gulf coast.

A large portion of Florida’s western and Panhandle coast was already under a tropical storm warning when the National Hurricane Center announced that a quickly moving depression had become a named storm. The center said it is the earliest that a third named storm has ever formed in the Atlantic basin.

Colin’s maximum sustained winds Monday morning had increased to near 50 mph (85 kph) with some slow strengthening possible during the next two days. The storm was centered about 360 miles (580 kilometers) west-southwest of Tampa and moving north-northeast near 14 mph (22 kph).

“It’s going to impact most of the state in some way,” Gov. Rick Scott said in a phone interview. “Hopefully we won’t have any significant issues here, but we can have some storm surge, some rain, tornados and some flooding.”

The center of Colin is expected to approach the coast of the Florida Big Bend area Monday afternoon or evening, forecasters said.

Colin is expected to produce rainfall amounts of 3 to 5 inches and forecasters said up to 8 inches possible across western Florida, eastern Georgia, and coastal areas of the Carolinas through Tuesday.

Scott postponed a political meeting with presumptive Republican presidential nominee Donald Trump scheduled Monday in New York so he can remain in the state capital to monitor the weather.

It is the latest in a series of severe weather events across the country, from record-breaking heat in the West, flooding in Texas and storms that are expected to cause problems in the nation’s capital and mid-Atlantic region.

Scott warned residents not to simply look at the center of the storm, saying the heaviest rain will be to the east and west of it.

The National Weather Service in Mobile, Alabama, issued a flood warning for the Shoal River near Crestview and warned of possible widespread flooding in streams, creeks, and canals. Wind gusts threatened to bring down trees and branches and cause power outages.

The Georgia coast and the north Florida Atlantic coast were placed under a tropical storm watch Sunday evening.

Sand bags were being distributed to residents in St. Petersburg, Tampa and nearby cities.

Much of Southern Arizona, from Phoenix to Nogales, is under an excessive heat warning.

Other western and southwestern U.S. states are experiencing above-normal temperatures in the triple-digits.

Officials are warning residents to stay hydrated and avoid the outdoors between 10 a.m. and 4 p.m., when temperatures are highest.

Strong storms swept through the state downing trees and power lines and leaving thousands without power.

NJ.com reports about 19,000 Atlantic City Electric customers were without power at the height of the storm. The utility say most customers should expect to have their power restored by late Sunday night.

The National Weather Service had issued thunderstorm watches and warnings for the state.

No major damage or injuries were reported.

Thunderstorms in parts of Ohio have brought powerful winds that have caused some reported damage.

Many counties in northeast Ohio were under a severe thunderstorm watch or warning Sunday as a front moved through the state.

Fort Hood officials have identified the last of nine soldiers who died in Texas floodwaters during a training exercise as a 25-year-old Army specialist from California.

Army officials on Sunday said Spc. Yingming Sun enlisted in 2013 and first arrived at Fort Hood nearly two years ago. He and eight others who were previously identified died when fast-moving waters washed a 2 ½-ton vehicle from a low-water crossing Thursday.

Three others soldiers survived and have returned to duty.

Heavy and persistent storms the past two weeks have dumped more than a foot of rain in parts of Texas. The rain is expected to diminish this week and dry out areas such as Southeast Texas, where officials gave evacuation order to about 2,000 homes.

The National Weather Service said a tornado touched down in eastern Indiana when a weekend storm passed over the area.

The weather service’s Wilmington, Ohio, office said Sunday that a tornado with wind speeds of up to 85 mph cut a 1¼ mile path Saturday near Richmond, Indiana. No one was injured by the EF0 tornado, which is the weakest tornado designation the weather service assigns.