US stocks PLUMMET after… - The Horn News 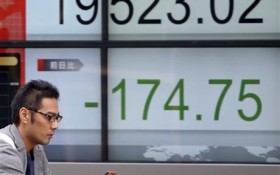 Stocks are heading lower in early trading, weighed down by weakness in mining and energy companies.

Prices for copper, oil and other commodities were falling early Thursday.

The price of oil shed 2 percent to $42 a barrel in New York.

Bond prices rose. The yield on the 10-year Treasury note fell to 2.32 percent.

EUROZONE SLOWDOWN: Official figures showed the economy of the 19-country eurozone grew only 0.3 percent in the third quarter, a slowdown from 0.4 percent in the previous three-month period. Most countries slowed down, including powerhouse Germany. The figures are a disappointment, though they cement expectations that the European Central Bank will expand its stimulus program.

ANALYST TAKE: “The figures add further support to the already very strong case for additional policy stimulus from the ECB at its next meeting in December,” said Jonathan Loynes of Capital Economics.

COMMODITY CRUNCH: A deepening slump in oil, metals and other commodities has also put investors off this week. Copper prices are down 23 percent this year while the benchmark U.S. oil contract fell $1.18 on Thursday after the U.S. government said crude stockpiles grew by 4.2 million barrels last week. Oil stabilized on Friday, rising 2 cents to $41.77 a barrel in electronic trading on the New York Mercantile Exchange.

Prices for the raw materials, which are priced in dollars, were looking less attractive as the Fed readies for a rate hike while the European and Japanese central bank look set to keep their rates low and consider rolling out more stimulus measures. Those moves would result in a stronger dollar, which in turn would make dollar-denominated contracts costlier.

FED FOCUS: A number of Federal Reserve officials, including Chair Janet Yellen and Vice Chair Stanley Fischer, gave speeches Thursday but offered little clarity on timing of an interest rate hike, a move that would end an era of stimulus policies that have boosted stocks. However, a growing number of investors are pricing in an increase at the U.S. central bank’s December meeting. William Dudley, the president of the Federal Reserve Bank of New York President, said “it is quite possible” that conditions set by the Fed’s policymakers under which it would begin to “normalize monetary policy could soon be satisfied.”